So says parent company Newport, whose executives are in optimistic mood after an “outstanding” 2011 and strong start to 2012. 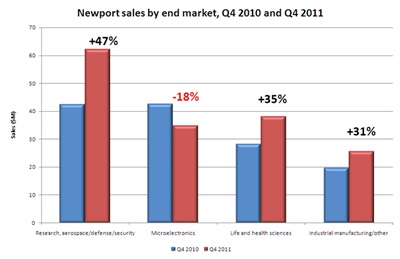 Newport Corporation, the parent company of photonics industry brands Spectra-Physics, High-Q Laser and Ophir Optronics, among others, has posted a 14% increase in sales for fiscal year 2011 over 2010, and says that 2012 should be a “great year” for the company.

CEO Robert Phillippy made the comments as he announced total company revenues of $545 million for fiscal 2011. “[It was a] strong finish to an outstanding year,” he told investors, adding: “We expect another excellent financial performance in 2012, [and] we’re off to a great start.”

Part of the reason behind that optimism is that the High-Q Laser division, which specializes in ultrafast laser engines, has recently registered a $37.7 million, two-year order for its products to be incorporated into surgical applications by an OEM customer in the medical sector.

“We are now beginning to participate in the clinical space,” added the CEO, pointing out that Newport’s sales into the life and health sciences sector have typically been for laboratory applications until now.

That large order was received after the end of Newport’s 2011 fiscal year, and reflects what has been an encouraging start to 2012 for the company. Demand from the microelectronics industry has shown a slight but unexpected upturn, Newport said, while recent comments from key OEM customers in the sector such as KLA-Tencor and Applied Materials on the level of capital expenditure in 2012 have suggested that this market may return to growth sooner than had been predicted.

Diversification in action
Newport’s recent acquisition spree – the company has bought each of High-Q, Ophir and ILX Lightwave within the past six months – is helping the company to become less susceptible to the vagaries of the microelectronics market. In the latest quarter, this reporting sector accounted for only 22% of total sales, compared with 32% just a year earlier.

Even before the boost of the $36.7 million ultrafast order, Newport’s key laser unit had been gaining strength, with CFO Chuck Cargile telling an investor conference call: “Quite simply, Spectra-Physics had the best financial quarter in its history.”

Now, with the rapid integration of the High-Q ultrafast offerings with the Spectra-Physics operation – Newport announced “Spirit”, the first product to combine a High-Q source with a Spectra-Physics user interface and packaging at last month’s Photonics West trade show –Cargile indicated that momentum should build each quarter in 2012. Phillippy added: “2012 should be a great year for Newport.”

Newport has also shored-up its long-term finances thanks to a new $250 million credit facility – of which a $185 million senior secured loan has been used to pay off recently maturing bonds, leaving $65 million as an undrawn line of credit, should it be required. “We now have no more convertible debt,” Cargile confirmed, with the company having made its final bond repayment within the past two weeks.

Thanks in no small way to the big High-Q order, the opening quarter of 2012 will see Newport register an order level that will be “by far” the largest in the history of the company – even though underlying orders from the semiconductor sector will likely be well below the levels seen early last year. And that has given the executive team plenty of confidence for their 2012 outlook.

“We entered 2012 with record backlog scheduled to ship in the next 12 months of $168.7 million, and new order activity levels have been high in the first quarter [of 2012],” Phillippy said. Based on that strong start to the year, the company expects 2012 to deliver sales of between $670 million and $685 million, suggesting a year-on-year increase of around 25%. The CEO has previously set a target of $750 million in company revenues for fiscal year 2013.

“We expect our sales and profit to grow sequentially in each of the remaining quarters of 2012,” concluded the CEO, with much of that growth relating to increased sales into medical and defense and aerospace applications.