El.En swings to profit as Cynosure stake is reduced

Italian laser company with a minority shareholding in US-based Cynosure reports a 26% increase in revenues. 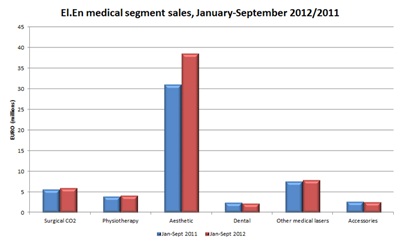 El.En, the laser source and system maker based in Florence, Italy, has reported a 26% increase in sales for the third quarter of 2012, compared with the same period last year.

Boosted mainly by fast-growing demand for lasers used in aesthetic applications such as hair and tattoo removal, the increase is partly the result of strong growth at the US company Cynosure, in which El.En now holds a much smaller minority stake following last week’s public stock offering.

With group sales growing to €61.8 million in the quarter, El.En was able to produce an earnings before interest and taxes (EBIT) figure of €4.7 million – swinging into the black from the loss of €0.6 million posted a year ago.

Not including the Cynosure figures, El.En’s sales for the latest quarter were still up 10% on last year, reaching €33.5 million and delivering an EBIT of €1.7 million.

Aesthetic boost
The latest update confirms a growth trend evident since the start of 2012. In the first three quarters of the year, the Italian company’s overall sales (including Cynosure) have reached €191.1 million, up nearly 30% compared with 2011.

Of that sales total, more than two-thirds (€129.8 million) was generated through medical and aesthetic applications, with €34.7 million in after-sales service revenues and €26.6 million from industrial laser sales.

El.En reported a step-change in medical sales from last year’s nine-month total, a rise almost entirely due to aesthetic applications and resulting both from recent acquisitions and organic growth.

“The increase of 52% in the aesthetic segment is based on the outstanding performance of [El.En group companies] Deka, Asclepion and Quanta, besides excellent results at Cynosure,” noted the company, adding that Cynosure had benefitted significantly from the acquisition of Hoya Conbio and Elémé.

“Moreover, Cynosure is now starting to reap the benefits of the success of the Cellulaze system, which makes it possible to treat cellulitis using a patented technology created through a cooperative effort between El.En and Cynosure,” states the company’s quarterly report. 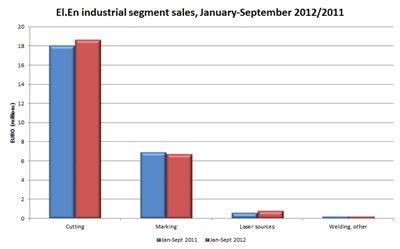 Hair removal
The main application in the aesthetic sector is hair removal, for which Cynosure sells alexandrite laser systems that are now also distributed by Deka and Quanta System. Thanks to the acquisition of Hoya Conbio last year, those group companies are also now able to offer multi-wavelength systems.

Even outside of the Cynosure business, El.En has witnessed rapidly growing demand. “In the medical sector the consistent growth of the aesthetic segment (+24%) has been the driver,” the company said. “Within this sector, lasers for hair removal and for the removal of tattoos and vascular lesions were outstanding in terms of the sales results. A positive trend was also shown by the CO2 laser systems thanks to new applications.”

On the industrial side, where sales were flat with last year’s figure, demand for cutting systems has slowed down in the latest quarter - mainly due to the weaker Chinese market and the European debt crisis.

Controlling interest in Cynosure ceded
Cynosure’s recent public offering of stock, which raised net proceeds of $55 million, means that El.En’s shareholding in the company has dropped from around 22% to less than 15%. While that might not seem like such a major change, it is significant because the Italian company will no longer have a controlling interest in the US firm.

Under the company’s bylaws, that controlling interest gave El.En the right to appoint four of the seven board members – a right that now becomes void.

According to a Reuters report quoting El.En CEO Andrea Cangioli, the company will aim to expand into China’s medical sector from next year as it expects the country to increase its level of healthcare spending. Cangioli also wants to strengthen El.En’s distribution network in the US – independent of Cynosure – and develop a larger presence in Brazil.