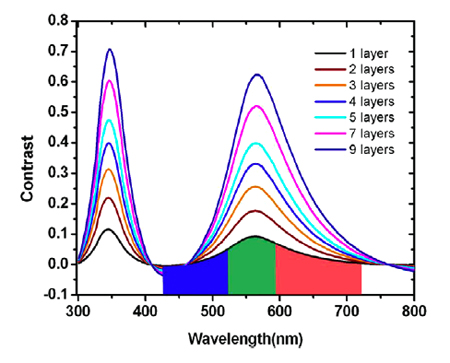 Chinese scientists have found an efficient way to measure thickness of graphene.

Since graphene was first isolated in 2004, its special properties and proliferating applications have been extensively researched and documented. However, scientists have long been trying to find an efficient and economical means of measuring its thickness.

Now a group of researchers from China appears to have solved the problem by devising a universal method based on a standard optical microscope.

The thickness of a sample of graphene, as well as many other two-dimensional materials, can be obtained by measuring the red, green and blue components of light as they are reflected from the material’s surface.

A paper published in IOP Publishing’s journal Nanotechnology, shows that the contrast of red, green and blue values between the substrate on which a sample is placed and the sample itself increases correspondingly with the thickness of the sample.

The method is fast, simple and requires no expensive equipment. The researchers, from the Harbin Institute of Technology at Weihai and Southeast University, based in Nanjing, believe the development represents a significant contribution to the fundamental research and potential applications of graphene and similar materials, as many of their remarkable properties depend on the thickness of the material itself.

Co-author of the study Professor Zhenhua Ni commented, “In the past, methods for identifying the thickness of two-dimensional materials have typically been very expensive with a slow throughput. Our technique combines a common microscope with a simple piece of software, making it a fast, cheap and efficient means of measuring thickness.”

The researchers tested their method by examining mechanically exfoliated graphene, graphene oxide, nitrogen-doped graphene and molybdenum disulphide, all of which have attracted great interest due to their intriguing electrical, mechanical, thermal and optical properties.

A standard optical microscope was used to obtain optical images of the samples and a piece of software called Matlab was used to read the red, green and blue values at each pixel of the optical image. Raman spectroscopy and atomic force microscopy were used to confirm the researchers’ thickness measurements.