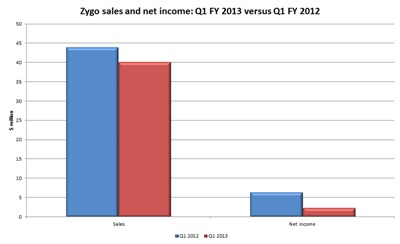 Precision optics and metrology firm Zygo has reported a decline in sales in its latest financial quarter, the result of deferred investments along the supply chain – and particularly in the weak semiconductor market.

That prompted a 10% slide in the value of Zygo's stock, although CEO Chris Koliopoulos said that sales of large-aperture metrology systems had “filled in” for the worsening semiconductor market, along with two ongoing developments in extreme ultraviolet (EUV) technology and initial sales from the company’s new Taiwan base.

AS a result, Zygo was able to post what Koliopoulos described as “reasonably strong” sales of $40.2 million in the opening quarter of the company’s fiscal 2013, down from $44 million in the same period last year.

The CEO added that Zygo was investing heavily in the early ramp-up of a new optics program at its facility in Tucson, Arizona. That ramp has resulted in a steeper-than-expected learning curve, impacting margins in the latest quarter.

Partly as a result of that investment, the company’s net income slumped to $2.4 million from $6.5 million a year ago, although Zygo should see the benefit of the development in future quarters.

Bookings up slightly
On a positive note, orders were up slightly on a sequential basis, as Zygo continues to target new applications in life sciences and the security and defense sectors. Koliopoulos said:

“Economic uncertainty in the US and abroad has deferred investments in capital equipment and expansion. Although demand in some markets has continued to lag expectations, we are investing in new markets and growing our footprint in strong market regions.”

As well as the Tucson and Taiwan expansions, the company has also now fully acquired “ZygoLOT”, the sales and applications center based in Darmstadt, Germany, that Zygo had previously part-owned via a joint-venture agreement.

Koliopoulos concluded: “We continue investment in optics capabilities in our new facility in Tucson to take advantage of opportunities in an anticipated recovering economic environment during the second half of the fiscal year."

In early trading following Zygo's results announcement, the company's stock price dropped by around 10% to $15.70 - its lowest valuation in six months.