Vision2012: US MV market creeps up 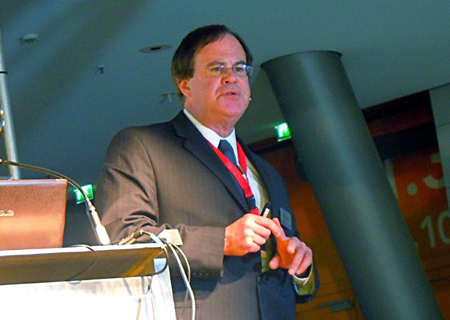 A hot ticket at the annual Vision show is the AIA Networking Reception which includes presentations on machine vision market performance, with a focus on North America, a multinational panel discussion, and an opportunity to eat, drink and network for industry bigwigs, before everybody heads off to the other annual Vision show institution, the rockin' Stemmer Imaging party.

Paul Kellett AIA’s Director of Market Analysis at the Automation Technologies Council announced that after this year’s presentation he would be retiring so he was pleased to be making a generally positive final report on the machine vision sector’s return to form. Below, optics.org publishes AIA’s analysis and forecast, which he presented at the AIA reception on the showfloor at the Messe Stuttgart on November 7.

Today, I would like to present AIA’s outlook for 2013 machine vision sales in North America. The starting point is the overall economy in the US. Our forecast is that growth will be 2.1%, which is weak growth and which is identical to the rate of growth experienced in 2012 – so no real improvement on 2012, which is the bad news. But the good news is no recession either, according to most economists.

More important to machine vision sales than the overall economy is what happens in the manufacturing sector. Looking at the performance of the US manufacturing sector of the past decade, we can see a general upward progress of industrial production. However what is striking is the tremendous dip in industry’s 2009 great recession. However, since then, there has been a spectacular recovery.

In 2012 a lot of that recovery has weakened – it gets flatter and that flatness will continue into 2013. In fact we will probably see less growth in production next year than this year. 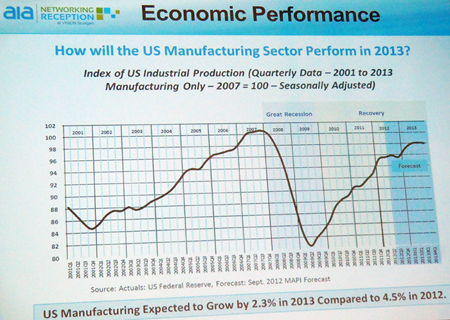 With that in mind, and looking at recent years’ purchasing managers' indices (PMI) data, we see again the dip for the great recession of 2009 followed by the recovery.

This year, 2012, has been an especially interesting year because at the beginning of the year there was expansion with a positive PMI. More recently through this year the index goes flat meaning there is no expansion: in fact, there has been a little contraction.

In 2013, we will see a continuation of that pattern to the extent that we have some fluctuations, so we are looking at nothing but seasonality with no significant improvement in manufacturing output.

An instructive way of looking at the manufacturing sector is to focus on manufacturing capacity utilization, which is simply a measure of the extent to which production facilities are on line and actually producing goods. Looking at these data, again we see the recessionary dip in 2009 followed by the strong recovery after which the pattern flattens more or less with a little improvement through 2013.

We began by looking at the overall economy then we narrowed the focus to the manufacturing sector. So let’s now narrow it still more to look at a couple of industries that are very important to machine vision, starting with the automobile industry.

I would like to draw your attention to the rate of capacity utilisation in 2012 compared with 2011. As that suggests, 2012 was an absolutely fantastic year for automobile production in the US. The growth that is expected for millions of units on an annualised basis is 11.7 % that is absolutely spectacular. So what about next year, 2013? Well, we will probably continue to see some growth but not to the same extent – only about a 4.2% rate.

Another industry that’s a very important market for machine vision systems is the semiconductor industry. Look at production data for 2012 and 2011 there is a clear difference. But in contrast to the automobile industry, 2012 semiconductor production is mainly below the figures for 2011 and still dropping off this year. In fact, for semiconductors, 2012 has been a very poor year, looking at the percent annual changes that are mainly in negative territory.

However for 2013, growth rates should be strong and solid, especially for equipment sales, which are the important market for machine vision companies.

As these two contrasting markets suggest, different industries can find themselves at different points in the business cycle curves. So in order to maximise your machine vision sales you will need to target industries that are in the growth phase in the business cycle. But unfortunately, machine vision companies traditionally target industries that are in the shrinkage phase and that situation will probably continue into 2013.

AIA research has found other bright spots in manufacturing: the housing and aerospace sectors. If your company targets these industries, including semiconductor and automotive, then you would probably do relatively well next year, all things being equal. 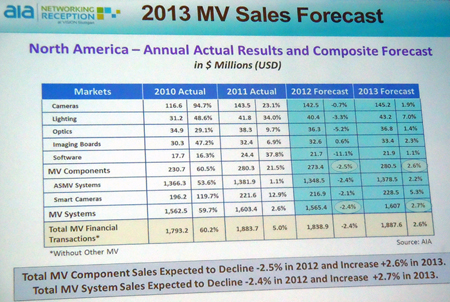 In preparing our latest forecast, the AIA looked at no fewer than four different indicators to maximise the accuracy of our forecasts.

These were: the economic forecasts that I have already described; so-called “sentiment scores” (based on members’ own sales forecasts); long-term historical trends in machine vision sales data; and recent sales activity reports.

Considering the sentiment scores, our member companies overwhelmingly reported that they expected their sales to rise, which also happened to agree with the AIA’s trend analysis.

In the recession of 2009, North America lost about one third of our machine vision market. That was absolutely devastating but since then we have bounced back strongly during the past two years. There has been absolutely incredible growth well above the historical sales trend line. Clearly because of this 2009 dip there was a lot of pent-up demand and that demand was largely satisfied in 2010-2011, which is why recent sales volumes have been so high.

But what happens when the sales revert to the historical trend line? That would equate to a financial change around now of -5.6%. Of course, it’s negative now because of how high the 2011 sales were.

Looking to 2013, what kind of growth rate could we expect with sales right on the historical trend line? The answer is growth of about 3.1% meaning a return to positive territory. But actually AIA has not just followed the historic trend for our forecast; instead we have gone with the so-called compositors’ forecast. So what’s the difference?

Here’s what we basically did: we took that trend forecast and we factored in the effects of those other economic forecasts that I have described earlier and also from your recent sales activity reports. Then we validated these data with the sentiment scores, which gives us the revised annual trend changes of -2.4 % for 2012 and a positive trend of 2.6% for 2013, not quite as big but a return to positive territory nevertheless. 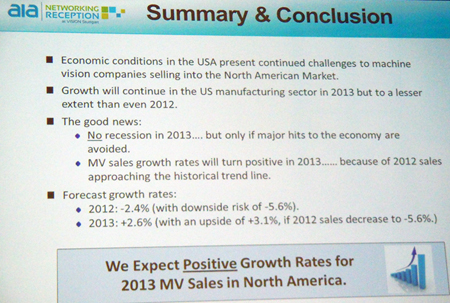 Furthermore, the latest statistics on Chinese manufacturing are encouraging. Then, of course, there is emerging markets’ growth and the indirect benefits of a rejuvenated housing sector.

In conclusion, we have seen the economic conditions in the USA represent very strong challenges for MV companies. But we have also seen that there will probably be growth next year – in the overall economy, in the manufacturing sectors – but weak growth and that assumes that major shocks continue to be avoided. And, very importantly, as we have seen we will probably experience a return to positive rates of growth of MV sales next year. We will return to positive territory, which is something we can all look forward to.