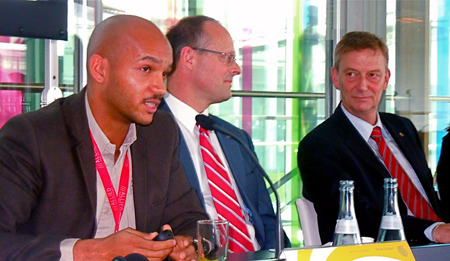 Baroan, Munkelt, and Walter reviewed the first quarter century of the Vision show.

In the 25 years of its existence the Vision expo has evolved from its modest beginnings in suburban Stuttgart to become arguably the leading world trade fair for the machine vision industry.

At a conference at the Stuttgart Messe yesterday a panel of “visionaries” reviewed the first quarter century, reported the latest show stats (inevitably up on last year’s numbers) and rewarded a new particpant’s technical breakthroughs in the exciting area of 3D vision: France’s New Imaging Technology.

Firstly, Thomas Walter, Director of the Industry & technology Division, Messe Stuttgart, described some of the characteristics of the exhibition and conference, which has has had to move twice during its history to accommodate the growth.

”The Vision show’s highly innovative exhibitors have experienced exciting development measures since 1987,” he said, “for the benefit of many industries they support. Everyone involved in any way with machine vision - from a start-up company through to an international group, from a component manufacturer through to a system integrator - takes part in this incomparable industry event.”

Going on to describe this year’s event as breaking the previous exhibitor record, Walter commented that, “Nearly all the key players in the machine vision industry are represented, showing off the latest in cameras, sensors, frame grabbers, software, illumination, lenses, and accessories.

”This year we have 372 exhibitors from 32 countries, while the percentage of visitors from beyond Germany has increased to 49 percent. The larger international delegations are from the USA, Japan, UK, Netherlands, Switzerland, Canada and France.” 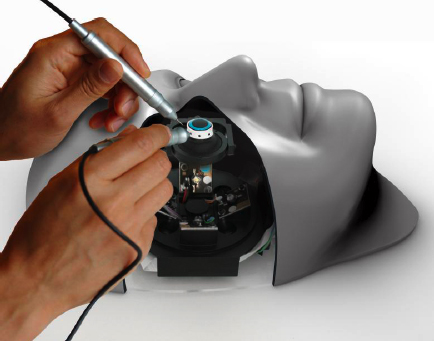 Focusing on one key application area, Walter decribed how image processing nowadays plays a critical role in medical technology. “Mini-cameras measuring just 1 cubic millimetre are used in endoscopy and during operations while denture impressions are now recorded digitally with the aid of machine vision cameras.

“Machine vision also helps in the mass production of medical devices, for example in packaging control and quality inspection. This is why the Vision show’s Medical Discovery Tour is taking place again in 2012 – with 38 dedicated exhibitors identified as medical specialists. Interested delegates can join a special tour sponsored by the trade journal DeviceMed.”

Walter also commented how pleased he was to see that the German federal government has recognised the importance of the machine vision industry and that the German Federal Ministry of Economics and Technology has again sponsored a joint stand for start-ups.

”This means that not only well-established machine vision companies will have a professional platform at VISION 2012, but also that young enterprises will be able to present their innovations and forge contacts during the trade fair. The ten available places are completely booked out.”

Next up was Dr Olaf Munkelt, Chairman of the Executive Board of the VDMA Machine Vision Group, who elaborated on the day’s earlier VDMA market review and forecast.

"We are confident that the machine vision industry in Germany will maintain its previous record level in 2012. Despite macroeconomic uncertainties, industry turnover will reach the previous peak value of €1.5 billion in 2012. For 2013 we are expecting further growth of two percent."

Since the middle of 2012, the monthly VDMA incoming order index for machine vision has been increasing significantly. While German market demand is still weakening slightly, there are now stronger demands coming from abroad. Munkelt added, “All over the world we are seeing a huge demand for automation solutions, increasingly in Asia, but also in North America.”

Describing the machine vision sector as a mature growth industry, he went on to say that the success story of the Vision reflects “the spectacular development of machine vision”. The VDMA market survey goes back to 1995 and a comparison of key parameters from then and now reveals how rapidly machine vision technology has succeeded in penetrating the most diverse fields of application.

He commented, “The German industry’s turnover of €230 million [equivalent] in 1995 has increased over sixfold to more than €1.5 billion today. In the same period the average vision enterprise size increased from 10 employees to over 40. Moreover there were hardly any specific standards for machine vision in the middle of the 1990s - whereas nowadays industry-specific standards and a strong component industry has evolved. The triumphal procession of machine vision is increasingly manifested as embedded intelligence in smartphones, machines, service robots, agricultural machines or cars.” 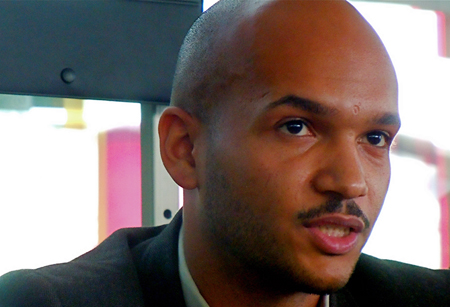 Vision 2012 Award-winner Nicolas Baroan gave a presentation on his company and its technology. “New Imaging Technologies is a young and innovative French company. It was created four years ago by Dr. Yang Ni after several intensive years of research into CMOS sensor technology.

”We specialize in developing a new class of High Dynamic Range CMOS sensors, based on a patented logarithmic technology, we call Magic. We operate as a fabless company, like many CMOS players and our main office is based in Paris area.

Our Wide Dynamic Range CMOS sensors, with a 140dB performance, are aimed at the machine vision market, for applications such as barcode reading, welding, the IT and automotive sectors, as well as some defense and security applications. Potentially we could also be in gaming, gesture controls and robotics.”

NIT’s Magic 3D solution is originally a combination of two technologies: at the lower level, the sensor architecture of its two Native WDR sensors offers the range up to 140 dB in a single shot, thanks to their logarithmic response. At the Upper level, the Magic 3D utilizes the standard stereoscopic principle.

Baroan explained, “We chose the stereoscopic principle as it is still the most universal way to achieve 3D. By acquiring two data streams from two cameras, a geometrical calculation is performed and a depth map described.

”Behind the 3D stereoscopic technique, we find the most innovative part, the heart of the technology: the NIT Native Wide Dynamic Range sensor technology. NIT’s WDR sensors address the HDR requirements by providing a dynamic range of more than 140 dB thanks to a log response, which mimics the human eye’s response and therefore suppresses the temporal light accommodation. This means that suitable contrast images are achieved under all kinds of illumination, and no image lag or blooming effect appears.”