Stock rises 15% as company says that the action it took in early 2012 has protected profitability. 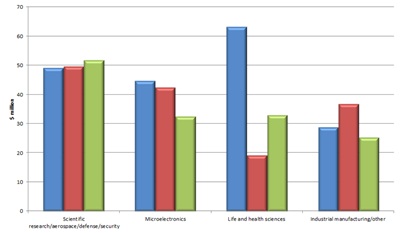 Orders in the first three quarter of 2012

Shares in Newport Corporation have risen sharply, despite the company announcing a sequential decrease in sales for its third fiscal quarter of 2012.

The California-headquartered laser and photonic component manufacturer posted revenues of $142.9 million for the three months ending September 29, down from $153.7 million in the second quarter. Orders of $143.8 million were also down sequentially, from $148.3 million – primarily a result of extended weakness in the microelectronics and industrial sectors (see figure, right).

CEO Robert Phillippy confirmed that Newport has slimmed down its global headcount by 5% in recent months as a result of the spending slowdown. “We are currently implementing these actions and realizing the benefits more quickly than we had planned,” he said.

Chuck Cargile, the company’s CFO, added: “We recognized the deteriorating market conditions early in the year and acted responsibly and quickly to adjust our cost structure to protect our profitability.”

Those moves appear to have worked, with Newport reporting a pre-tax income of $11.5 million – only slightly down on the $13.8 million recorded for the second quarter. The actions should ultimately save Newport around $15 million in annual expenses, although temporary factory shutdowns actually resulted in greater savings in the latest quarter.

The company’s Spectra Physics laser division posted sales of $42.5 million for the third quarter, with Cargile saying: “We believe that the current uncertainty related to government funding has caused customers to delay purchases of higher-priced products, such as lasers, more than purchases of component products.” 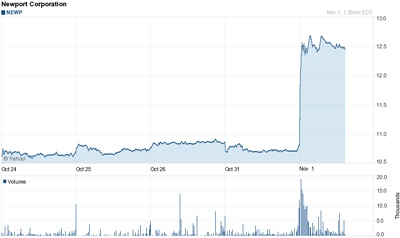 On the up: Newport rises

Silver linings
The CFO sees no near-term improvement, particularly in the microelectronics sector, whose weakness is largely to blame for the 2012 slowdown. At the start of this year, at which point things looked much more optimistic, Newport said that it expected to post annual sales of between $670 million and $685 million.

After three quarters sales have so far reached $454 million, and although the final quarter of the year often benefits from a “budget flush” of spending in some regions, Newport’s executive team is urging caution, with Phillippy expecting Q4 sales to be similar to those just posted for Q3. That would result in annual sales in the region of $600 million – more than 10% below those initial expectations.

Customer confidence is not being helped by the potential for the so-called “fiscal cliff” to derail federal spending in the US, but the CEO does see some silver linings. “While we do not see this funding scenario changing significantly in the current quarter, if the US government addresses the pending fiscal cliff issues early in 2013, we would expect to benefit from some pent-up demand for our products during the second and third quarters of next year,” Phillippy told an investor conference call.

There are even some signs of life in the moribund semiconductor capital equipment sector, where the Newport CEO sees ASML’s planned merger with Cymer as a positive move for the industry. He noted that Newport has already secured three early design wins from semiconductor equipment OEM customers for its precision motion platform for 450 mm wafers.

Phillippy also sees a bright spot in infrared optics for automobile night vision and commercial security applications, which ought to help to return the recently acquired Ophir division to growth. “[These] are two areas that we are very well positioned for, and engagement is high,” he said.