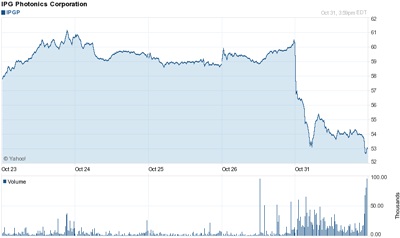 Shares in IPG Photonics lost more than 10% of their value after the company issued its third-quarter financial results for 2012 – despite the market-leading fiber laser company beating its sales guidance for the period.

IPG posted sales of $156.4 million for the third quarter, above the guidance range of between $145 million and $155 million. That represented a 21% year-on-year increase as the company saw growth in new aerospace applications and sustained demand for high-power sources from automotive manufacturers and heavy industry.

Automotive strength
High-power lasers accounted for $67.1 million (43%) of the quarterly revenues, while sales of pulsed lasers – up more than 50% from the same period last year – were responsible for $50.4 million, thanks in part to marking applications in consumer electronics production, where IPG believes it has won market share.

IPG’s CEO Valentin Gapontsev added that the company had gained market share with a key automotive customer in France that had previously been using a rival’s technology for welding applications.

While the wider European economy remains weak, the location of much of the continent’s automotive manufacturing base in Germany remains a strong sector for now, and IPG appears to be benefiting. For example, optics.org understands that BMW is investing heavily in fiber lasers to be used at its Mini production facility in the UK.

Japan could provide the next wave of demand. In an investor conference call, Gapontsev said that while all the major Japanese auto makers were already using IPG’s lasers to some degree, it was typically in limited quantities. With one of Japan’s leading car producers set to decide on a major new investment soon, IPG could be set for strong future business here.

It isn’t just the traditional automotive production centers that IPG is penetrating. CFO Tim Mammen added that there was “a great degree of optimism” surrounding the opportunity to sell more lasers to Chinese auto makers in 2013, while the company has also received orders for some large systems to update a large automotive facility in Russia.

100 kW laser ordered
Gapontsev also revealed that an unspecified Japanese customer had placed an order for a 100 kW fiber laser, which is likely to be shipped in the first quarter of 2013 and used in deep-penetration welding applications. It would represent the highest-power industrial laser ever built, said the CEO.

The company also has an agreement with the giant Russian energy producer Gazprom, and Gapontsev described another novel application in which a customer is using an IPG laser to drill “several kilometres into the earth” to access oil and gas wells more efficiently.

While IPG remains on a strong growth track, investors appeared disappointed with news that the company’s book-to-bill ratio in the third quarter slipped below unity, prompting guidance for the final quarter of the year that suggests a slight drop-off in revenues from the record-breaking Q3.

“We will face challenges in the fourth quarter, including historical seasonality in some markets and macro-economic pressures in a few key geographies,” said Gapontsev, with seasonal weakness in China becoming an increasing influence on IPG’s business as sales to the country ($34 million in the latest quarter) grow quickly.

With its domination of the fiber laser sector still apparently intact, and laser diodes now being produced in-house at a cost of around only $2 per Watt, IPG continues to generate sizeable profits. In the third quarter it delivered pre-tax profit of $60.3 million – up from $49.2 million for the same period in 2011.

Mitsubishi market entry
Although rivals including Trumpf’s SPI Lasers, JDSU, Rofin subsidiary Nufern, Jenoptik and GSI Group’s JK Lasers are all vying to compete in the fiber-laser space with their own kilowatt-scale options, it appears that none is making much headway in terms of market share.

At the lower-power end, analyst Mark Douglass from Longbow Research believes that Nufern has expanded laser production in response to some success in marking and engraving applications, particularly in China, and that SPI is benefiting as a second-source supplier in some instances.

For high-power fiber lasers, where IPG rules the roost, JDSU is believed to be gaining some traction via its partnership with the Japanese tool company Amada. But Douglass sees little threat to IPG, and speculates that Mitsubishi may release IPG-equipped systems shortly.

Earlier this month, Mitsubishi issued a release saying that it would unveil a fiber laser system at the Fabtech trade show being held in Las Vegas, Nevada, on 12-14 November. The release quoted Bill Isaac, the VP of Mitsubishi Laser, saying: “This isn’t the first fiber laser, but we took the time in research and development to make sure that when we entered the market, we had it right.”

• IPG’s founder and CEO Valentin Gapontsev has been signed up to deliver a keynote speech at the forthcoming Laser Marketplace Seminar, which will be co-located with next year’s Photonics West exhibition and conference taking place in early February.

Seminar organizer Pennwell Corporation, which also publishes Laser Focus World magazine, says that Gapontsev will discuss developments in, and opportunities for, fiber lasers in his talk, which marks the 25th anniversary of the seminar.