How best to power optical networks? 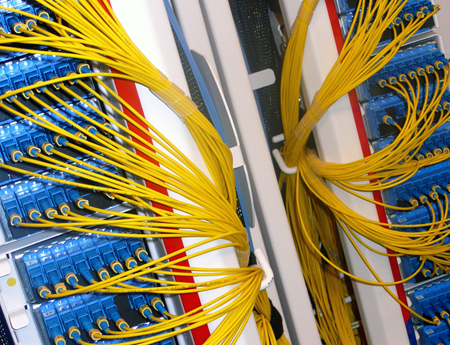 Two distinct technical demands appear to be pulling the development of next-generation optical networks, systems and components in different directions.

On the one hand, as broadband and mobile applications proliferate there is the universal desire for higher speeds, higher volumes and higher quality of optical processing - meaning a greater demand for energy.

On the other hand, costs, standards and legislation, and an almost universal desire to be more energy efficient are demanding that the primary objective is achieved using less heat and light.

This apparent conflict was the context of the Symposium on Energy Consumption of the Internet, organized at the recent ECOC 2012 conference by EPIC, the European Photonics Industry Consortium, and the iMinds ICT research group of Ghent University (formerly IBBT). The presentations and panel discussion quantified the energy footprint of different components of the network: local access, core networks, data centers and user equipment.

Electrical power resources, however are increasing at a far smaller rate, about 3% per year. At the present time, the internet consumes about 5% of world electricity generation. Paolo Frankl, director of renewable energies at the International Energy Agency emphasised the need to develop new “green” energy sources in the electricity mix, noting that more photovoltaic power was installed in Europe in 2011 than from any other source.

Presentations from systems provider Ericsson and network operator France Telecom described efforts to lower energy consumption through installation of systems that can be dynamically reconfigured, allowing some parts of the network to be shut down during lower traffic period. Early retirement of legacy equipment will also accelerate reductions in consumption.

Results from the EU project TREND showed that the electrical consumption of the core network is dependent on the level of traffic, and suggest that this would be the best location to implement such innovations. The access network power consumption, on the other hand is not as strongly affected by the level of traffic. Peter Vetter presented the Green Touch consortium which has been formed by Alcatel-Lucent to focus on energy-saving strategies.

During the panel discussion, it was learned that figures from energy consumption due to data center traffic are probably understated, because most of the available data predate the explosive growth in cloud-computing and video transmission. However, based on current trends, the power consumption of the internet is expected to rise from 5% of total resources today to 8% of total electrical power generation by 2020. 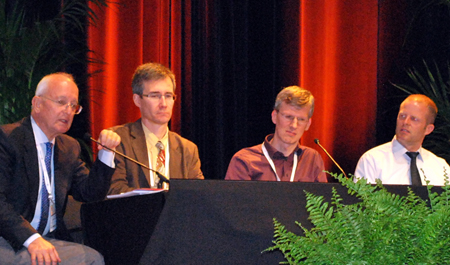 Panel members were given a series of questions and following are their responses and the associated discussions.

Is there a need for collaboration between energy production and green ICT strategies, or can both worlds work in a separate way?

Frankl: Intelligent networks such as smart grids can assist in reducing the power consumption at peak moments.

Marsan: Local energy generation, especially from renewables, is important for base stations, and can be very effective.

Gosselin : Use renewable energy where it is difficult to generate electricity, especially for base stations.

Pickavet : But we need to be careful, because using renewable energy where and when it is available is not always the best solution. An IBBT study showed that moving data centers close to renewable energy sources, according to the “follow-the-wind / follow-the-sun” paradigm, can be inefficient. It is not that easy to say that such a revolutionary case is always better than the classic case.

Frankl: We have to make the differentiation between two distinct cases: (1) renewable energy close to the demand (e.g. a lot of people have a huge solar resource), (2) renewable energy far away (e.g. wind / hydro).

Audience comment: If data centers are spread around to follow-the-wind / follow-the-sun, then there will be a need for a huge communication network that also needs energy.

Pickavet: Moving electricity is much often easier than moving data.

Panel conclusion: Further collaboration is needed, and using smart grids and generating renewable energy close to ICT demand points (such as base stations) could be helpful. However, we need to be< careful when there is the need to move a lot of data towards data centers in the neighborhood of renewable energy sources.

Wireless access networks are consuming a lot, but can this be solved by using small radio cells, and what about the related radiation?

Gosselin: There is a need for a breakthrough architecture, with macro cells evolving to base stations with larger capacity using small cells. Small cells means that fewer users are covered, but they will consume much less power (a convenient rule of thumb: cell x2 = power consumption x8). Combing macro cells with small cells is the way to go. Power radiated will be much smaller, even with more cells - but it is very difficult to communicate this.

Marsan: A single antenna should be installed on every corner. The more antennae, the less power required per antenna and the more equally distributed the power would be. Switching off some smaller cells during the night could lead to further advantages. Although the remaining base stations need a higher power, this would be only a marginal increase. 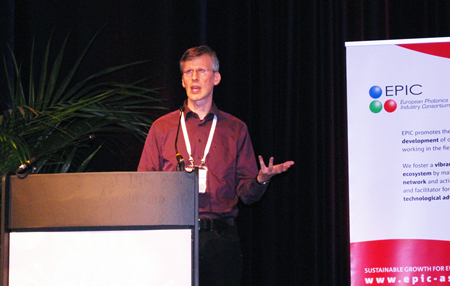 Vetter: Large scale antenna arrays also offer a solution. As they are more directional, their energy efficiency can be increased by a factor of 32. Health impact is mainly to do with perception. For in-house, it is better to use a single cell for the house instead of one per room.

Skubic: Small cells make a lot of sense, and should be promoted.

Panel conclusion: Small cells consume significantly less power and should be used for capacity and energy efficiency reasons. Most probably, they will be combined with macro cells.

Home modems are typically consuming 10W. However, do households care about 10W?

Vetter: Governments need to take some care here because actually the end user often does care about a green label.

Gosselin: It is actually more than 10W, but several tens of W at the customer if you include set-top box, TV, PC. The operator should provide services to manage the home network. The home network is key.

Frankl: It seems that the dynamics change to optimize: the IEA publishes a free downloadable book called Gadgets and Gigawatts.

Audience: Should the operator charge in bits or bits/s? From a green perspective, charge should be based on capacity/usage.

Panel conclusion: There is an important role for network operators to lower the ICT energy consumption of the households, but today the incentive is not very high.