Equipment providers sense an upturn, and with the launch of its LED-based “personal wireless lighting” system, Philips might just kick-start the lighting revolution. 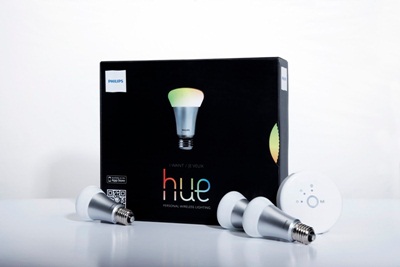 by Mike Hatcher
Providers of LED chip manufacturing equipment are finally starting to sense an upturn in demand, just as a high-profile product launch from industry giant Philips shows off just what makes solid-state lighting so different from what has gone before.

The Dutch company’s “hue” lighting system does not come cheap, but Philips is touting it as the start of a fundamental shift in an industry that has remained largely unchanged for the past century.

In a statement announcing that the new “personal wireless lighting” system will be available exclusively from Apple’s retail stores from October 30, Rene van Schooten, CEO of light sources and electronics at Philips Lighting, said: “Digitization and personalization are the key market trends driving the launch of Philips hue and they are central to the transformation of our lighting business.” Initially controllable only via Apple’s iOS operating system, Android functionality is slated to arrive before the end of the year.

None of this would be possible without LEDs, and there is now growing evidence of the market penetration that solid-state lighting is starting to make. In an investor conference call last week, Philips CEO Frans van Houten said that LED-based lighting product sales were up more than 50% year-over-year, and now accounted for nearly a quarter of the company’s total lighting sales.

On the anecdotal side, Paul Hyland – CEO of Germany’s Aixtron, a major supplier of the MOCVD equipment that is fundamental to manufacturing LEDs - last week noted the arrival of the first 60 W-equivalent LED bulb on sale in Europe for less than €10 W, and its immediate popularity.

“The retailer concerned was sold out of these lamps within the first few hours of going on sale, so consumers evidently have a healthy appetite for LED lighting at these price levels,” Hyland told investors in a call to discuss the company's Q3 results. 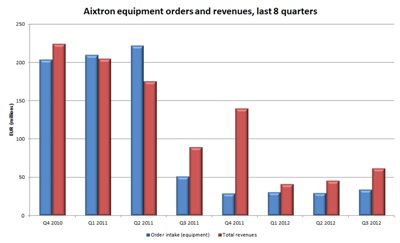 Trough over? Aixtron's orders tick up

LED equipment trough “over”
The problem for Hyland and others is that this appetite has not yet turned into a boom in sales of MOCVD or other LED manufacturing equipment.

And that is because the industry is still plagued by overcapacity and highly competitive pricing – something that is making it difficult for the likes of Philips to make healthy margins on their solid-state lighting products, or for chip makers to justify additional spending. As van Houten acknowledges:

“We are confident about our ability to be the winner in the new world of LED lighting. However, there is still work to do to achieve our 2013 targeted margin range,” said the Philips CEO in an investor call. “Across the board, cost structures are too high structurally for the future of LED lighting, where we need to prepare ourselves for some ongoing competitive pressure.”

He added: “I do feel that we are absolutely on the right path. 50% sales growth in LED in the third quarter is no mean achievement. It's really very good. It shows the leadership that we have.”

Aixtron and key rival Veeco Instruments had both expected the turnaround in demand for capital equipment to become evident in the quarter just completed, but it is now evident that this didn’t happen. As a result, Aixtron now expects to post a €125 million loss this year as the spending hiatus continues. So when will the upturn arrive? 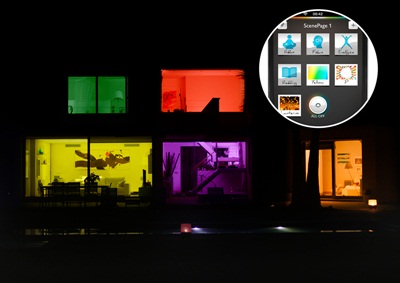 Matching the mood to the room

“This is perhaps an understandable customer reaction, given the recent LED pricing decline and consequent margin pressures they are suffering from, as well as their concerns regarding the sustainability of the current strong demand coming from LED backlighting of LCD TVs.”

While in his view it is now only a matter of time before the new capacity required to support the LED lighting ramp has to be ordered, the precise point at which that happens remains difficult to predict. In the meantime, Aixtron has decided to write off more than €50 million worth of components and spare parts that it feels will no longer be required by LED makers.

But in what on the surface appears a disappointing third quarter, Aixtron did see some possible signs of an uptick. At €34.5 million, order intake remained low in historical terms, but did at least reach its highest level in a year.

Hyland added: “We are clearly getting closer to the beginning of the third and biggest major LED investment cycle, namely for LED general lighting. It is not a question of ‘if’ this substantial market arrives; it is only a question of ‘when’.”

Optimism – but limited visibility
Despite the inevitable loss this year and that hefty write-down, Hyland said the good news was that he believed the industry had now passed the “trough point” in the current order cycle. “Orders and shipments are both picking up, albeit modestly at this point in time,” the CEO told investors.

US-based Veeco has also picked up on some positive trends. CEO John Peeler, who like Hyland been expecting a faster upturn in orders in Q3, said that tool utilization rates were varying between 80% and 100% in Taiwan, while the leading Chinese manufacturers were at more than 90%.

“Our visibility is pretty limited, but we believe that Q3 was the bookings trough, and that business will get better from here,” Peeler said. One major question determining the rate of recovery in capex spending by LED makers will be the degree to which Chinese manufacturers consolidate the excess capacity in the country that was created by the strategic investment made possible with central subsidies.

As Peeler noted, while the leading producers in China might be working at very high utilization rates, that is certainly not true for the second- and third-tier companies that were largely responsible for the remarkable boom in MOCVD equipment spending across 2010 and 2011.

“I think there is underutilized capacity in China, more so than anywhere else in the world, and some of that capacity could be transferred, and slow an overall recovery,” Peeler told investors. 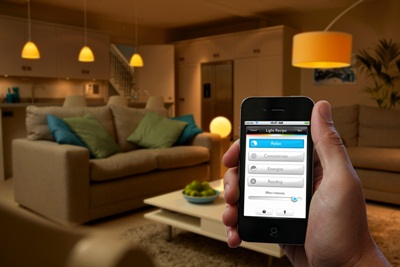 Lighting’s “iPod moment”?
There are other reasons to be optimistic about an impending upturn. They include China’s recent banning of 100 W incandescent bulbs (the country is aiming for 100% LED penetration in lighting by 2020); the complete phasing out of incandescents in Europe; and the fact that in the US Amazon.com is now selling a 60 W LED replacement bulb for just $15, thanks to utility company rebates.

Philips’ launch of “hue” will add to that optimism, and also suggests that the lighting company believes that offering value-added performance will be the best way to improve margins.

Hooking up with Apple to deliver the wireless controllability (Android control is slated for December) appears to highlight a desire to tap into the spending power and design preferences of iPhone afficionados.

As with all things Apple, pricing is a key factor. At $199 for three 600 lumen bulbs (equivalent to 50 W incandescents) and a control system, and $59 for each subsequent bulb, this is far from your standard screw-in replacement.

But if Philips can imitate Apple by convincing people that it is worth spending more on products than they otherwise might by loading them with attractive design, remarkable functionality and clever marketing, it might just be what solid-state lighting needs to cross over into public consciousness.

The iPod was not the first digital music player, and the iPhone was not the first smartphone. But their influence cannot be overestimated. Time will tell whether “hue” does indeed signal the start of something much bigger, and it does at least come with one major advantage over many Apple products – a hike in efficiency that will help to reduce energy bills, rather than add to them.

That efficiency advantage has long been seen as the key selling point for solid-state lighting. Yet it may turn out to be of secondary importance.