US maker of LED chips and solid-state lighting products is now selling lots more lumens for every dollar of its sales revenue. 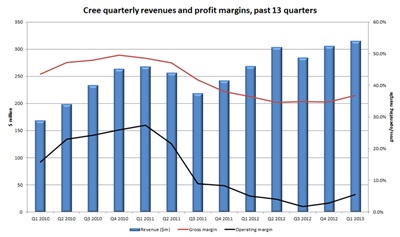 Cree, the vertically integrated US manufacturer of LED chips, components and lighting products, has posted its highest-ever figure for sales revenues in the company’s opening quarter of fiscal 2013.

Partly a result of last year’s acquisition of Ruud Lighting, revenues climbed 17% year-on-year to just under $316 million, with net income of $16.1 million up from $12.8 million last year.

However, long-time CEO Chuck Swoboda told an investor conference call that “the big news” was not the record-breaking sales figure, but last month’s decision to introduce a ten-year warranty for most of Cree’s commercial LED lighting fixtures.

Swoboda said that the warranty was “unheard of” in the traditional lighting industry, where both incandescent and fluorescent bulbs are capable of expiring at virtually any time.

Despite several record-breaking quarters as far as revenues are concerned, Cree’s profitability has tumbled in recent years as competition in the LED sector has become ever more intense. Just two years ago, in the first quarter of the Durham, NC, company’s fiscal year 2011, Cree reported an operating income of $73.4 million on sales of $268.4 million. In the latest quarter, operating income was only $17.3 million.

In fact, Cree’s operating margin has shrunk from more than 27% to less than 6% in the past two years, while gross margins have also slumped in the face of greater competition (see figure). 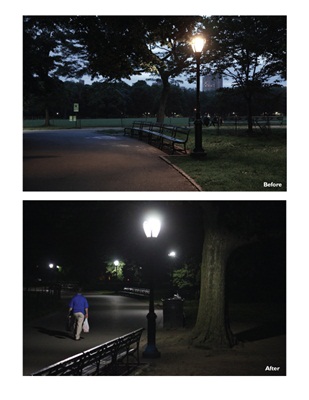 “Strategic investment”
Part of the reason for those margin declines is a strategic move by Cree to reduce the cost of LED lighting and thus make it more attractive to consumers. Swoboda says that for some applications the up-front premium for a solid-state lighting option is now just 20% - though in many other applications LED-based equivalents are up to four times more expensive than traditional technologies.

One key way that the company is attempting to close that gap is through its proprietary “SC3” technology, which dramatically reduces the lumens-per-dollar cost of solid-state lighting.

Swoboda stresses that as a result of such technological advances, the number of lumens “shipped” by the company from quarter to quarter has escalated, with dollar sales growing at a much slower rate.

Examples of products that incorporate the SC3 technology include the new XP-E2 LEDs launched last month. They deliver up to 143 lumens per Watt in cool-white and an improved lumens-per-dollar metric thanks in part to more efficient phosphor conversion and a larger optical dome for better light extraction.

Swoboda said that in some applications Cree was now offering its customers twice as many lumens per dollar spent – an “investment” that he believes will ultimately pay dividends by driving wider uptake of the technology.

Commenting on wider trends, CEO Swoboda added that future sales were difficult to predict because of the macroeconomic “headwinds” impacting all consumer spending and infrastructure investments.

Nevertheless, he sees the company’s sales increasing again in the current quarter, to between $320 million and $340 million as the holiday season arrives.

With the vast majority of Cree’s lighting product sales currently in North America, the company believes that it has plenty of scope to drive sales in both Asia and Europe, with Swoboda expressing “cautious optimism” for progress next year in the key market of China.

One recent high-profile installation in the US that uses Cree technology is a 1600-luminaire upgrade to the lighting of walkways and grassy areas in New York’s Central Park. The switch from conventional lamps is expected to cut energy use by nearly two-thirds, and save authorities nearly $30,000 each year in comparison with metal halide lamps, thanks to reduced maintenance needs.