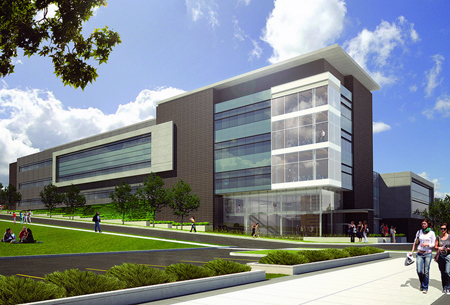 The ARC's scientific discoveries are expected to bring new technologies for diverse applications.

The University of Ottawa, Canada, has started building its Advanced Research Complex (ARC), which the developers say is taking the next step towards its becoming Canada’s science and engineering powerhouse – as well as “the world’s photonics capital”.

Known as the uOttawa ARC, the research and development facility will house two separate research efforts - the revamped uOttawa Centre for Advanced Photonics; and a cluster of state-of-the-art geoscience laboratories.

The scientific discoveries of the two teams of renowned photonics and geoscience researchers are expected to bring new technologies for a variety of applications including more accurate medical diagnoses, faster telecommunications, safe disposal of nuclear waste and the development of solar energy, according to Maria Scopelliti, the university’s International Media Relations Officer.

Since the photonics revolution that began in the 1970s with the National Research Council of Canada, which continues with companies such as Ciena, Cisco and JDSU, the University of Ottawa has been building a team of world-class researchers aiming to bridge the gap between theory, research and applied science in photonics. The ARC should provide these experts from various disciplines with cutting-edge facilities and equipment. The ARC facilities feature isolation from all environmental vibrations and minuscule changes in temperature and humidity.

Optics.org interviewed Maria Scopelliti and various senior academics to further investigate the plans, key objectives and opportunities for R&D partnerships, funding and education that the new center will bring. 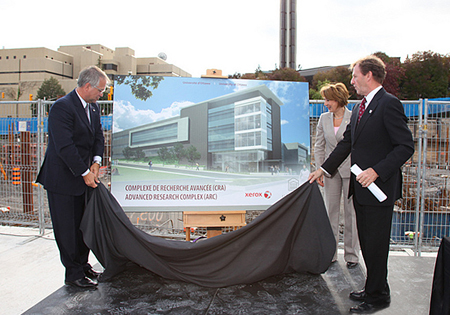 "Ottawa will become largest photonics center in Canada and one of the world's largest".

Optics.org: What is the investment plan for the advanced photonics and geoscience R&D centers?

According to Denis Cossette, Associate Vice-President, Resources, the university’s Board of Governors has approved a $47 million initial investment. The Canadian Foundation for Innovation (CFI), a federal government institution, is contributing another $10 million. As the project progresses, total investment could reach up to $70 million.

Brian Thompson, executive director of the Development Office, adds that a fundraising campaign is also just beginning, in 2012, with the goal of raising $25 million, to be used for recruitment and retention of world-class talent, programming and curriculum development, student support and infrastructure development, says.

Furthermore, researchers will also bring government grants for their research programs believed to be worth up to $25 million/year.

Who will be the director and senior staff of the photonics facility?

Since the facility is two years away from completion, as of yet no director has been named; the governance structure is being finalized, says Mona Nemer, Vice-President, Research of the University of Ottawa.

Some of Ottawa's leading researchers in photonics are:

Dr. Paul Corkum: the University’s Canada Research Chair (CRC) in Attosecond Science and a winner of the Gerhard Herzberg Canada Gold Medal for Science and Engineering.

Dr. Karin Hinzer: Canada Research Chair (Tier II) in Photonic Nanostructures and Integrated Devices, and a rising star in renewable-energy research, including the use of nanostructures in highly efficient solar cells.

Dr. Pierre Berini: another rising star in photonics. He is a Steacie Fellow, University Research Chair in Surface Plasmon Photonics and a Canada Foundation for Innovation Researcher.

Dr. Trevor Hall: Director of the Centre for Research in Photonics and Canada Research Chair (Tier I) in Photonic Network Technology, moving from King’s College in London to take up the position. 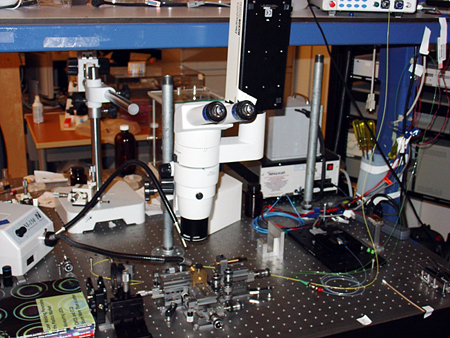 What will be the ARC’s main photonics R&D objectives?

According to Hugo Bégin, Administrator, Canada Excellence Research Chair in Quantum Nonlinear Optics, under the umbrella of the ARC, we will advance the boundaries of photonics research through the integration of our three main thrusts:

(1) Fundamental studies of light-matter interactions: Using ultrashort and ultra-intense laser pulses will enable fundamental research to push our understanding of matter and physical phenomena into uncharted territories. In addition, the development of laser machining technologies will improve our capacity to fabricate and test photonic devices.

(2) Photonic structures and devices: Photonic-based structures and devices are the foundation for an energy-efficient, miniaturized, and cost-effective economy. The integration of fabrication and characterization facilities in the new building and the new research facilities will foster an unprecedented synergism among the entire photonics community in Ottawa, and will greatly increase our ability to produce advanced devices that can be integrated into real world application.

(3) Applications of Photonics in the real world: ARC will enable the direct and rapid deployment of photonic technologies into the real world. These technologies will dramatically contribute to advanced optical telecom systems, integration of sustainable telecommunication architecture and devices, efficient solar energy panels, and quantum information protocols.

You boldly claim that the ARC will make Ottawa the “photonics capital of the world”?

We mean this primarily in terms of the intellectual quality of our program; the presence of numerous SMEs in this sector and the significant number of government labs dedicated to photonics. But within the next several years we hope to become the largest photonics center in Canada and one of the largest in the world. Our objectives are to create a program of great breadth, stretching from fundamental physics to advanced engineering development.

Are there yet any details of potential commercial partnerships?

According to Professor Robert W. Boyd, photonics researchers at the University of Ottawa have strong ties with the National Research Council government labs; we have at this time five Canada Research Chairs in photonics and one Canada Excellence Research Chair. Our research also receives much funding from the Canada Foundation for Innovation and from the Ontario Ministry of Economic Development and Innovation, as well as in-kind contributions from equipment manufacturers. 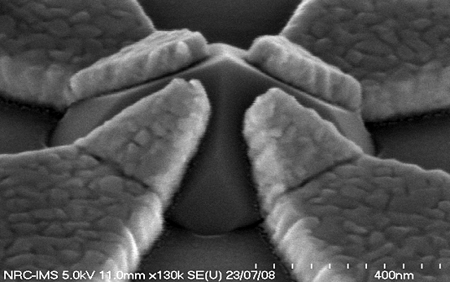 Dotty about research: An InAs/InP quantum dot with four electrodes, developed at uOttawa.

Several smaller partnerships exist between individual researchers and the private sector to advance research and development in photonics. In addition, the new ARC building will have space that is dedicated to joint research and partnerships with the private sector. Professor Ian Clark states: we have Goldcorp funding for a research chair, Mark Hannington, who will participate in ARC Geoscience research. We have a Canada Research Chair for Environmental Radionuclides, Jack Cornett. Isobarics Inc, of Bolton, Ontario is developing with the ARC Accelerator Mass Spectrometer (AMS) group a next-generation collision cell isobar separator technology.

What about partnerships with other research centers?

According to Professor Ian Clark, for Geoscience there will be partnerships with Dalhousie University’s Cosmogenic Nuclide Exposure Dating Facility, University of Laval’s Centre d’Études Nordiques, Université de Québec à Montréal GEOTOP Laboratory. Professor Robert W. Boyd mentions that though several partnerships for ARC’s photonics research are already in existence, we are finalising other international partnerships right now and plan to announce them within the next several months, once they are formalized.

What undergraduate / postgraduate opportunities will the centre offer in terms of courses, qualifications and research activity?

An interdisciplinary graduate program will be offered in the coming years. In addition, each professor associated with the centre has an appointment in an academic department, primarily in Physics or electrical/computer engineering, computer science or chemistry. Both Physics and EECS offer concentrations in photonics.

Professor Ian Clark, a pioneer in using isotopes in environmental research and the Earth sciences, stated that the Geoscience labs are designed for integration of research opportunities for students, with a new open access layout concept that facilitates collaboration between geoscience labs, technical staff, researchers and students. Moreover, preparation labs and the AMS facility are operated on a student-access basis. We offer technical courses to the mass spectrometer industry, training laboratory technologists and managers from all over North America in new technologies. The ARC has generous allocation of space for graduate students, both full time, and for temporary use by visiting students from other research centers.

What is the funding program?

Through the Canada Foundation for Innovation, the New Initiatives Fund and Leading Edge Fund, Canada’s government has committed to invest $5.5 million toward the construction of the new complex. An additional $7.2 million will go toward state-of-the-art equipment for two of the labs that will be located in Canada. Through investments in basic science research infrastructure at institutions across the country, the Canadian government is hoping to contributie to "brain gain" - the country already ranks at the top of the G7 for higher education expenditures on research and development. These investments are also expected to contribute to a stronger, more innovative economy, according to Gary Goodyear, Canada's Minister for Science and Technology.