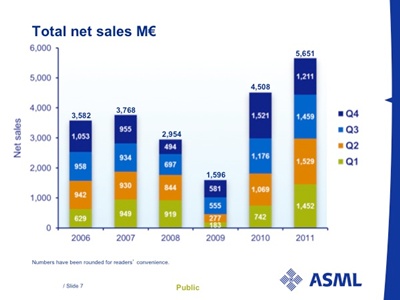 With its share price at a decade-long high, ASML’s senior executive team is confident that the Dutch lithography company has usurped Applied Materials as the leading supplier of semiconductor capital equipment in 2011.

Eindhoven-based ASML typically ranks in third or fourth place on the list of top suppliers, behind Applied Materials and the likes of Tokyo Electron and KLA-Tencor. But after a record-breaking year in which it has smashed previous bests for both revenue and profit, CEO Eric Meurice says that changing dynamics in the semiconductor industry have favored ASML.

“Our business used to be driven by both the number of chips made and the density [of features] in the silicon,” he told a press conference announcing Q4 results for fiscal 2011. “Now it is driven by density [rather than] by units.”

As an example, Meurice cited the poor year for sales of personal computers overall in 2011. In the past, this would have impacted ASML’s business, but now, because of the greater complexity of the designs being incorporated into logic chips used in notebook PCs, tablets and smart phones, semiconductor makers still need cutting-edge lithography tools – however many chips they are likely to manufacture.

As expected, ASML posted record revenues of €5.65 billion in fiscal 2011, with the final quarter proving to be the weakest of the year as sales fell to €1.21 billion. For the year, that total represented a 25% increase on 2010 – which was itself a record.

On the bottom line, ASML delivered a net income of $1.47 billion, up nearly 50% from 2010. The company is using much of the cash generated to buy back shares and is also increasing its shareholder dividend by 15% from last year, to €0.46 per share.

Positive outlook
In their outlook for 2012, Meurice and CFO Peter Wennink said that they had good visibility for the first half, in which they expect to see sales of €2.4 billion – essentially flat with the final quarter of 2011.

With a boost to earnings per share from its cancellation of repurchased shares, ASML’s stock price is now trading at its highest level since early 2000, while Meurice says that it now has a market share of around 75-80% in the semiconductor lithography sector, ahead of Nikon.

The CEO attributes those strong fundamentals to the company’s high level of investment in research and development, which, at €78,000 per employee, is the highest in Europe – higher even than the traditionally research-intensive pharmaceuticals industry.

Of late, much of that spending has gone into the development of extreme ultraviolet (EUV) technology for the next generation of lithography tools, and which has been held up by delays in the availability of sufficiently powerful and stable EUV light sources. Now, following intensive collaboration with key light source suppliers, the technology is edging closer to commercial deployment, with ASML in the process of qualifying a 20 W laser-produced plasma source from Cymer.

Meurice says that although ASML will start shipping commercial EUV tools at a rate of one per month from the middle of this year, it will likely be 2014 before the technology is truly in production and manufacturing wafers at economic throughputs.

Responding to questions about the historic failure of ASML to deliver EUV technology, the CEO said that there was now a “huge chance” that EUV will happen, and that the remaining problem was largely one of regaining credibility and the full trust of customers.

Currently ASML has 11 bookings for production EUV tools, which are priced at a whopping €75 million each. And such is the level of research and development outlay needed to deliver the technology that ASML will dominate the supply of such tools. Meurice estimates that the company has already spent €1.7 billion on EUV development, and supporting a level twice that to enable two suppliers to enter the market was a price that the semiconductor industry was unwilling to pay.