The company's high-power direct-diode lasers have received a $3.2 million vote of confidence. 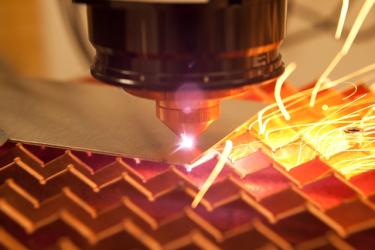 His company has now been awarded a clutch of contracts from the defense sector, proving that others share his conviction and considerably raising the profile of the Massachusetts start-up.

"We have been awarded contracts worth $1.1 million, with another $2.1 million pending," said Sossen. "Most of it, but not all, is from the US Department of Defense. We have won two contracts from one of the leading defense contractors."

TeraDiode separately indicated that the $3.2 million total includes three Small Business Innovation Research (SBIR) Awards. The SBIR program is a highly competitive program that encourages domestic small businesses to engage in Federal Research and Development. TeraDiode received Phase I contracts from three different defense agencies, which it expects will lead to the award of Phase II contracts next year.

Discussing the work to be funded, Sossen commented: "The application areas include designators, illuminators and high energy lasers. Many of the qualities of TeraDiode's core technology will bring a significant advantage to our customer's applications. Benefits include ultra-high brightness through the combination of power and beam quality, high stability over temperature and power ranges, and a compact, rugged design."

That core technology involves wavelength beam combining (WBC), a technique allowing the spatial superposition of several independent diode-laser external cavities. As Sossen outlined to optics.org earlier this year, WBC is based on a diffraction process.

"The outputs from separate laser diodes having different wavelength characteristics are brought together through a Fourier transform lens, and then passed through a diffraction grating that can be transmissive or reflective," he explained. "The diffraction grating's ability to convert different wavelengths to different angles is used to provide feedback to each emitter, via the transformation lens, and a laser resonator is formed between the highly-reflective coated back facet of the emitter, and the output coupler."

A thick cut
The net result is that the diffraction grating takes light arriving at different, although carefully aligned, wavelengths, and has them emerge in the same place, superimposed in space. The center wavelength stays stable with respect to changes in power and temperature, thanks to the self-compensating nature of the resulting external cavity laser, and the output can be readily scaled-up by adding more diode elements without adversely affecting the beam quality.

"The WBC process is very accommodating of imperfections in the quality of the beam from the emitter," said Sossen. "In practice, we can relatively easily build a laser around any emitter of suitable quality and reliability. Most of our work is currently at wavelengths of 900-1000 nm, but WBC can be applied to wavelengths from 400 to 4000 nm, depending on the application.

With the defense contracts now in the bag, TeraDiode is keeping its options for other applications open. These include the materials processing field, where the company has already demonstrated a 900 W TeraDrive laser able to cut a 6.65 mm-thick mild steel sheet, which the company believes to be the thickest metal section cut to date using a diode laser.

"While our technology offers significant value for defense applications, we are also aggressively pursuing industrial applications focused on metal processing, including cutting and welding," Sossen confirmed.