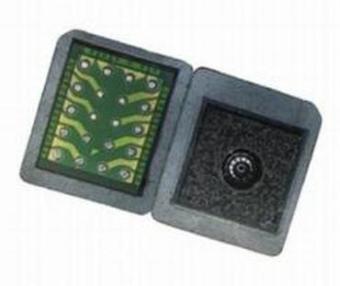 Morocco-based Nemotek Technologie has expanded its wafer-level camera (WLC) offer with the unveiling of the Exiguus product line, a module said by the company to boast the thinnest form factor in its portfolio.

The Exiguus H11-A1 VGA camera, the first member of the family to enter mass production, is 0.1 inches thick and intended for use in applications such as tablet PCs, laptops, mobile phone handsets and automotive solutions, where designers are constantly striving to fit optical modules into smaller spaces. Nemotek's existing camera modules are 2.6 mm thick according to data from the company, but the Exiguus is specifically said to be the thinnest module Nemotek manufacture.

"The module's thinness results from developments in both the optics and the sensor technology involved," Ali Elyazghi, senior engineer at Nemotek, commented to optics.org. "Sensors have evolved greatly, and this evolution has in turn pushed the optics to improve rapidly."

These improvements included achieving the necessary levels of color saturation and correction, edge enhancement and lens shading correction within the constraints imposed by the dimensions of the Exiguus.

"Keeping the camera's performance at a high level with a single element glass lens has been challenging for our optical design team, but achieving it shows great promise for future breakthroughs," said Elyazghi. "I believe we are pushing the boundaries of wafer-level optics to limits we did not think possible only few years ago."

Expansion plans
Nemotek operates from the Technopolis Park in Rabat, where its manufacturing capability includes in-house test and certification along with the operation of Africa’s first Class 10 clean room. Since its founding in 2008, the company has aimed to exploit its North African location as a means to access both European and Middle Eastern markets for high-end wafer-level systems.

Those plans include expanding its European presence through a new distribution partnership with Xipeq, and a push into the Korean market via a new sales operation in the country and a partnership with distributor Saram International. The Korean deal was driven by the rapid growth of the high-tech sector in that country, and the chance to sell to companies such as Samsung and LG.

External recognition of Nemotek's success in the field came in June 2011, when it was named as one of Frost & Sullivan's Global Entrepreneurial Companies Of The Year in the consulting group's Excellence In Best Practices Awards. Rajender Thusu, a sensors and instruments analyst for Frost & Sullivan, commented at the time that "Nemotek continues to outperform its competition by continuously evolving itself and keeping changing customer needs as the core of its product strategy."

• Nemotek's expertise in WLCs includes non-exclusive licenses for the Shellcase and OptiML technologies originally developed by Tessera, which Nemotek first obtained in 2008.

Last year Tessera announced that it was winding down its own efforts on wafer-level optics for camera modules, having concluded that improvements in alternative technologies made it impossible to achieve the company's expectations by pursuing a licensing strategy. At the time Tessera said it did not anticipate an imminent sale of its imaging and optics capabilities, which still rest in its DigitalOptics Corporation subsidiary.