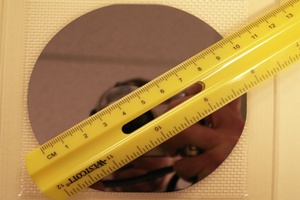 IQE, the UK-headquartered producer of advanced semiconductor wafers, has seen underlying US dollar revenues grow more than 20% in the opening half of 2011 – compared with the first six months of 2010.

In its interim trading update for the period, the Cardiff-based company, which runs manufacturing operations as far afield as Singapore and New Jersey, said that it expected to report revenues of at least £38 million ($61 million), and earnings before interest, tax, depreciation and amortization (EBITDA) of around £6 million.

That comes despite the adverse impact of currency fluctuations, and the revenue figure includes approximately £1 million attributed to the Galaxy Compound Semiconductors business that it acquired in September 2010 following a £20.8 million share placement. Galaxy specializes in wafers for infrared applications such as high-performance thermal imaging, and at the time IQE said that the deal would cost it anywhere between $5.5 million and $14 million – depending on performance-related earn-outs.

Opto applications
Although the larger proportion of IQE’s revenues (around 75% in 2010) is derived from sales of GaAs-based wafers used to make RF amplifiers for wireless applications such as smart phone handsets, it appears that the optoelectronics side of the operation is also performing strongly. Aside from the addition of the Galaxy business, IQE says that demand for its highly-regarded vertical cavity surface-emitting laser (VCSEL) structures is benefiting from applications such as finger navigation. Optoelectronics accounted for 20% of IQE’s business in 2010.

The company says that it is seeing a growth in demand for the relatively complex multijunction solar cell designs needed for concentrated photovoltaics (CPV) applications. In this area, IQE has been working with partners such as Quantasol, the early-stage UK company that recently sold its multiple quantum well (MQW) technology for raising the efficiency of CPV cells to JDSU. The US firm is aiming to move into CPV cell production as part of its expansion strategy, and sees the MQW designs as a way to differentiate its future products as the market becomes more commercially significant.

In addition, IQE is working on advanced GaN designs for high-brightness LED fabrication, in the form of epitaxial growth on native GaN substrate material, while it also has expertise in GaN-on-silicon structures that promise to help to significantly reduce the cost of solid-state lighting in the future.

In the company’s interim statement, IQE chief executive Drew Nelson commented that “accelerated growth” in demand for optoelectronic wafers had been one of the main reasons behind the strong performance, adding that there should be further improvements in the second half of the year. IQE is expected to report its first-half results on September 7.