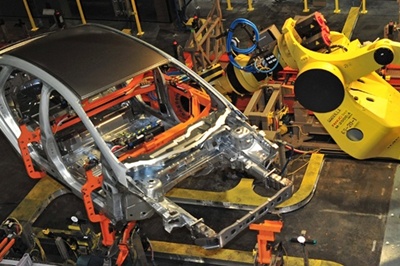 Lasers on the assembly line

Automotive giant Ford is to roll out a robotic laser inspection technology across 17 assembly plants, in another major investment in photonics by the car industry.

The anticipated €70 million ($100 million) investment will improve quality control of the fit and finish of components at hundreds of positions around a car – particularly of its doors - to ensure that wind noise is kept to a minimum.

Following a trial piloted at Ford’s plant in Valencia, Spain, the combination of laser and machine vision technologies will be used in production of the US company’s 2012 Ford Explorer and Ford Focus models. According to some reports, Ford’s Explorer model has suffered from wind noise, and the company says that the investment is being made because noise levels are a major industry challenge and a key factor determining consumer choice.

Ford Europe’s manufacturing quality manager Ron Johnson says that the scanner system measures the position of 500 key points on a car to a precision of 100 µm, helping to correct any doors that are slightly out of position. Up until now at Ford, this judgment had relied on a human operator’s subjective view. 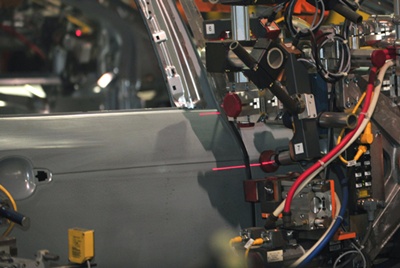 News of Ford’s major investment comes shortly after an estimated €37.5 million deal which saw rival car maker Volkswagen (VW) purchase 50 high-power laser systems from fellow German company Trumpf. Those systems, based on thin-disk lasers, are to be used in metal welding and cutting applications rather than quality control.

Both moves indicate how car manufacturers are have invested in new technologies following the huge slump in production triggered by the financial crisis and subsequent global recession in 2008, a trend benefiting suppliers of advanced, photonics-based manufacturing technologies.

However, there is speculation within the laser industry that the range of technologies available to car manufacturers has enabled VW to drive a hard bargain with Trumpf – although the laser systems company is sure to view the high-profile business as just one element of its profitable operation.