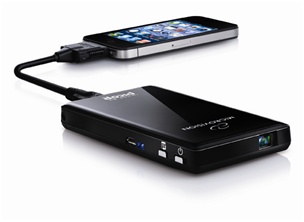 EpiCrystals, the Finnish developer of diode lasers and modules that was spun out of Tampere University of Technology in 2003, has introduced what it claims is the smallest and most efficient green light source for use in pico-projectors.

The frequency-doubled GaAs laser, which has a wall-plug efficiency of 8% and operates at 532 nm, is currently in pilot production, with qualification scheduled for later this year and a customer purchase agreement already in place. EpiCrystals says that the laser module will be available in early 2012 at a price of $45 in volumes exceeding 10,000 units.

Despite expectations of rapid growth in recent years, the market for handheld devices capable of projecting high-definition photos, films and presentations onto virtually any surface, is yet to take off. A major part of the reason for that is the difficulty associated with developing and manufacturing a suitable and affordable green source – in the form of either an LED or a laser.

Green LED efficiencies are still poor, while direct-emitting green laser diodes based on InGaN semiconductors are only just becoming available at suitable wavelengths and remain very expensive. As a result, the green laser chips that do exist are based on frequency doubling, typically using a periodically-poled lithium niobate crystal – reducing efficiency while adding cost, size and complexity to pico-projector design.

Tomi Jouhti, VP of business development at EpiCrystals, told optics.org that although the company’s product may sound like a straightforward frequency-doubled laser, it is in fact a highly integrated device: “Both the laser diode and the nonlinear crystal have very significant differences to what has been on the market,” he said. “The laser diode has both a mirror and an integrated lens, manufactured simultaneously with the laser chip.”

“The crystal [also features] both wide-band quasi phase matching (QPM) and a wide-band surface Bragg grating (SBG), which lock the central frequency of the laser and allow the system to work over a wide range of temperatures and currents.”

Jouhti adds that the combination of 8% wall plug efficiency and the 532 nm wavelength puts EpiCrystals ahead of the competition. “[The laser] is excellent for pico applications and it can be driven by a 2 V electrical system and very simple electronics.” 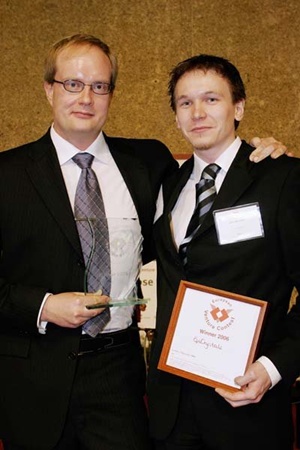 Stiff competition
EpiCrystals is up against some stiff competition in the race to develop a green light source suitable for pico projectors and future integration within smart phones.

Optoelectonics heavyweights Nichia, Rohm and Osram Opto Semiconductors have all been working on direct emitters, while Soraa – the Santa Barbara start-up spun out of the world-leading UCSB research group and backed by Khosla Ventures – has demonstrated a 520-525 nm laser diode with a claimed output of 75 mW.

One weakness of the direct emitters is the relatively short wavelengths that can be achieved with the InGaN material system – the frequency-doubled 532 nm wavelength is closer to the human eye’s peak frequency response in the center of the green region of the visible spectrum.

Pico projector developer MicroVision, which recently changed its business strategy after key green laser supplier Corning exited the market, has said that it will only use direct green emitters from now on, because although they are comparatively expensive right now, there is strong potential for their cost to be reduced through volume manufacturing – as has already been achieved with red and blue lasers.

At the E3 Expo consumer electronics and gaming exhibition in Los Angeles last week, Microvision was promoting its SHOWWX+ laser pico projector, which it is aiming at Apple iPod, iPhone and iPad users. The projector is on sale for $349 through Apple’s online stores covering Europe, the Middle East and Africa.

However, MicroVision has been dealing with delayed orders and a major cash burn for the past several quarters. Last month, it said that an OEM customer that had placed an $11.9 million order for its PicoP display engine had now delayed its product launch until the second half of this year, putting more pressure on MicroVision’s finances.