Development of portable detection unit could reduce the need for mass animal culls to control future outbreaks of the disease. 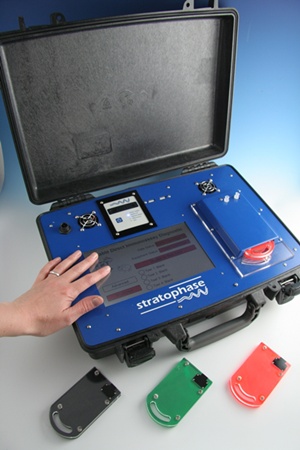 A research collaboration in the UK has shown that a portable optical sensor can identify the presence of foot-and-mouth disease (FMD) much faster than existing, laboratory-based methods.

The prototype sensor unit, which is based around optical microchip technology developed by the University of Southampton spin-out Stratophase, could allow veterinarians, inspectors and even farmers to diagnose the disease much more quickly than is possible today – potentially making widespread culls of healthy animals a thing of the past.

FMD is an infectious disease affecting cloven-hoofed animals. Although it is not usually fatal to adult animals, its debilitating nature severely affects productivity, for example the yield of milk produced by cows, and can kill young livestock.

The virus causing the disease spreads quickly through herds and can have a devastating economic impact, and because of the limitations of the established detection method – a combination of a polymerase chain reaction (PCR) and culturing – many healthy animals are culled in order to contain outbreaks. That is exactly what happened in the UK in 2001, when although only 2030 cases of FMD were confirmed, millions of animals were culled.

According to a Royal Society report into that outbreak, a key priority to limit the damage in future incidents is the development of “sensitive, rapid tests that can be used outside of reference laboratories”, to aid rapid diagnosis in the field.

In one of the main recommendations from its investigation, the Royal Society said: “The first suspected case in an outbreak must be diagnosed in an approved reference laboratory. Thereafter, modern diagnostic methods – including pen-side tests – need to be developed that can shift the burden of diagnosis to veterinarians on the farm. Rapid diagnosis, particularly before clinical signs appear, would limit the size of any epidemic and improve strategic deployment of resources. Such diagnostic methods must be linked by modern telecommunications to central headquarters.”

Feasibility study
Alongside the Institute of Biotechnology, Bristol Industrial and Research Associates and the Chelsea Technologies Group, Stratophase has just completed a £1 million feasibility project (Portable Direct Immunoassay Diagnosis Devices for Animals and Humans, or “PDIDDAH”) looking to deliver exactly such a method. Although the prototype unit developed demonstrates only a proof-of-principle right now, and has not yet been compared directly against the “gold standard” technique, it is said to be able to detect FMD “quickly, easily and with a high degree of accuracy” in the laboratory.

The technology developed by Stratophase has its roots in the telecommunications boom of the late 1990s – although by the time it span out of Southampton’s Optoelectronics Research Centre in 2003, that boom had turned to bust. Its core expertise is a direct ultraviolet writing process used to define waveguide structures such as couplers, splitters and Bragg gratings within glass layers – analogous to the way that lithography steppers write features into silicon microchips.

Although adapted for sensing applications, the optical chips still use standard telecom components such as 1550 nm laser sources and detectors. That technology provides a multiplexed detection platform on which immunoassays can be implemented, explains the company.

For FMD detection, the key thing to look for is a change in refractive index. When a sample is prepared and pumped across the surface of the optical chip, any FMD virus particles bind to specific receptor molecules, altering the local refractive index and giving a positive detection. “The research has shown that the platform has the potential to provide a robust, rapid, accurate, easy-to-use solution for on-site detection of FMD,” said Stratophase.

Company CEO Richard Williams added that the PDIDDAH collaboration provides a basis for further development of a wider range of diagnostic applications using the chips, which is what the company is now focused on for future product development:

“The strategy is to partner with organizations that already have a presence in the veterinary diagnostic market,” the company told optics.org. “Final productization will take place through such a commercial partnership, where it is anticipated to be implemented for a range of diagnostic applications within animal health.”

Williams anticipates applications in detecting a whole range of biological agents for both animal and human health, for on-site tests on battlefields and in hospitals, as well as farms.