History repeats itself as the German market responds to price declines, but European installations will fall this year anyway. 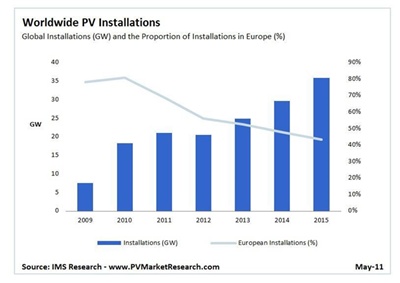 Global photovoltaic installations will grow 15% this year to reach 21 GW, but demand from Europe will decline in both 2011 and 2012 because of reduced incentives.

Those are two of the key messages in the latest PV industry report from analyst firm IMS Research. Like other market research firms, IMS initially underestimated the sharp increase in installations last year. Most now agree that around 18 GW was installed in 2010 – more than double the 2009 total. That boom was stimulated largely by price declines and with a similar picture emerging this year, IMS has raised its outlook.

Global installations in the first quarter reached 3.5 GW, reports IMS. It forecasts steady demand growth throughout the year, culminating in a very strong final quarter. “Prices are falling rapidly enough to create another surge in demand in markets such as Germany,” said IMS, adding that with the belated publication of its new incentive scheme, the Italian market – ranked second behind Germany in 2010 - is also emerging from “paralysis”.

But despite that, European installations are still expected to fall both this year and next, having reached a historic peak in 2010. IMS analyst Ash Sharma said: “Europe’s share of the PV market will fall considerably in the next 3-5 years; in fact, we predict European installations will decline in both 2011 and 2012 and will not return to the 2010 level for quite some time.”

Fukushima impact
That might seem surprising, given the reaction of the German government in particular to the Fukushima nuclear crisis. Having now decided to close all of its nuclear energy facilities by 2022, Germany has said that it will look towards renewable energy to make up the gap in supply. Nuclear had provided 23% of electricity in the country prior to Fukushima (source: IEA), and until the impact of the tsunami, the German government had publicly committed itself to nuclear power.

Despite its rhetoric, Sharma says that it remains unclear whether the talk will translate to real support for the PV industry. “The governments associated with most major markets have either cut incentives recently, or indicated that they will do [so] soon. We predict demand from Germany and Italy alone to fall by 3 GW in 2012.” At the same time, Europe’s share of demand will fall from 80% to just 56% in 2012 as installations in the US – which is now estimated by rival analyst Solarbuzz to have a 12 GW PV backlog – and Asia grow strongly.

Even so, IMS sees total PV installations falling in 2012 because of uncertainty in government policy in the US and Asia. In China, Sharma says that market growth will be limited to government-controlled projects, with no near-term prospect of a feed-in tariff.

“Yet again the outcome of the PV industry’s development in 2012 will be entirely dependent on reducing costs rapidly enough in order to keep prices in line with incentives in major markets,” Sharma concludes. “Although margins are being squeezed and prices are beginning to fall, further reductions are needed in 2012 and the key now lies in polysilicon and wafer supply to do this.”

Mike Holman, research director at Lux Research, another analyst firm that covers the PV industry, agrees that polysilicon prices are going to be the major determining factor governing PV pricing over the next few years (around 85% of the PV market relates to crystalline silicon cells). But he does not expect to see any major price declines in that time, arguing that polysilicon supply takes many years to establish and scale up. With the industry having only recently gone through just such a major investment, the next step change is unlikely to occur before 2015.

Nuclear gap
Of the available renewable energy options, filling the nuclear energy gap in Germany is a role more likely to be filled by wind power, which has always been favored as a utility-scale solution, than by PV, which is almost entirely used in the form of distributed micro-generation in the country. That is in contrast to the US, where the 12 GW backlog relates to utility-scale PV.

However, the distribution of wind power and energy consumption in Germany also poses a problem. While many of the country’s major population and business centers are located in the south of the country, its wind farms typically line the North Sea coast, meaning that an entirely new distribution system will be required to connect the two.

In all likelihood, as well as increasing its renewable energy mix, Germany will have to import much more electricity from its neighbors to make up the nuclear shortfall – probably via coal-fired power stations in Poland and nuclear-friendly France.