The first geosynchronous element of the new missile warning system launched from Cape Canaveral in Florida on May 7. 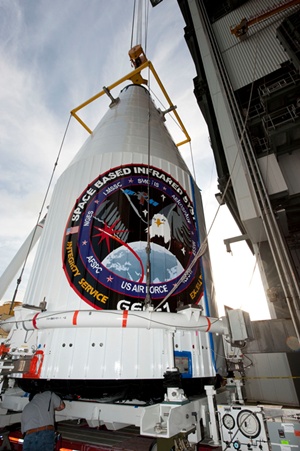 Infared sensing in space has entered a new era, with the launch last week of GEO-1, the first geosynchronous spacecraft that forms part of a series of satellites that will eventually make up the complete Space-Based Infrared System (SBIRS) constellation.

Featuring state-of-the-art infrared sensors including scanning and staring components, SBIRS represents a huge upgrade to the US military’s surveillance capability in orbit, with GEO-1 described by prime contractor Lockheed Martin as “the most technologically advanced military infrared satellite ever developed”.

Developed primarily to give earlier warnings of hostile missile launches, the system will also be able to provide more detailed information about natural phenomena. Arguably the key attribute of SBIRS is the much-enhanced sensitivity of the on-board infrared detectors, compared with those of the Defense Support Program (DSP) that it was designed to replace.

That improved performance means that the scanning sensors designed for wide-area surveillance to pick up signals of a missile launch can operate much faster – or over a wider area – while the staring sensors used for more detailed surveillance of smaller areas will have much greater sensitivity.

The direct importance of such advances in detector sensitivity to military operations were highlighted by DARPA director Regina Dugan in a plenary address at the recent SPIE Defense, Security and Sensing (DSS) show in Orlando, Florida. Dugan said that the ability to sweep large areas of terrain in Afghanistan at much faster speeds than were previously possible was crucial for pilots looking for safe landing spots for military aircraft.

Another key advance is that whereas DSP featured only short-wave infrared (SWIR) sensors, SBIRS also operates in the mid-infrared, and frequency bands that are not affected by the absorption of gases in the Earth’s atmosphere.

Jeff Smith, VP and program director for SBIRS at Lockheed, said, “We are confident SBIRS GEO-1 will deliver unprecedented, global, persistent, taskable infrared surveillance capabilities to the warfighter, nation and our allies for years to come.”

The original SBIRS contract, which is long overdue and over budget, included two geosynchronous satellites and two payloads for launch into highly elliptical orbits – as well as ground stations for receiving the infrared data. Since the original award, Lockheed has won additional production contracts for the program and in January got the go-ahead for a fourth geosynchronous payload.

The company built GEO-1 at its site in Sunnyvale, California, working alongside Northrop Grumman, which is the SBIRS payload integrator.