Leading laser vendor passes the $200M mark in quarterly sales for the first time ever, and raises its revenue guidance for fiscal 2011. 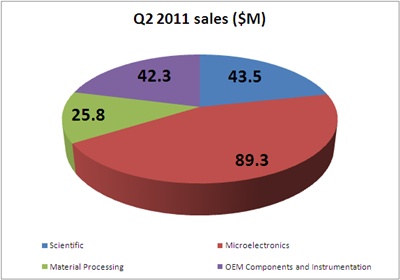 With increased sales in all four of its key markets, record total bookings, and more than $200 million in quarterly sales for the first time, the second fiscal quarter of 2011 could hardly have been any better for laser maker Coherent.

“Our record-setting bookings and revenue in the second quarter underscore the continuing strength in our commercial markets, especially in the microelectronics business,” commented the company’s CEO, John Ambroseo. Demand for lasers used in the packaging of smart phones and the production of flat-panel displays remains very high, he said, adding that Coherent was expanding capacity and building inventory to fulfill the growing order book – the company’s backlog now standing at $349 million.

The quarterly sales figure of $200.9 million represented a 35% increase on the equivalent quarter of 2010, and was also 10% higher sequentially. On the bottom line, Coherent delivered a net income of $23.7 million – nearly tripling the figure of $8.5 million posted in Q2 of its fiscal 2010.

With bookings remaining at historically high levels – up 1% sequentially to $236.7 million – the company has decided to increase its guidance for the full fiscal year, to between $790 million and $805 million. Previously, Coherent had forecast around $770 million.

Demand from microelectronics applications remains the stand-out performer of Coherent’s four key markets, accounting for just over 44% of sales [$89.3 million] in the latest quarter. “It’s leading the charge for us,” said Ambroseo, describing the market pull as “off the charts”. CFO Helene Simonet also told investors that microelectronics orders grew at the fastest rate of its four market sectors, up 11.6% sequentially to $144.6 million in fiscal Q2.

That represented 61% of total bookings in the quarter. Of the other three sectors, only materials processing bookings grew sequentially, by 6.6% to $27 million. Scientific orders dropped nearly 25% to $32.5 million as US stimulus funds continue to expire, while bookings from instrumentation and OEM customers were down 10% sequentially to $32.7 million as a result of normal seasonal effects.

US budget cuts offset
Looking ahead, Ambroseo said that the impact of cuts to the science budget in the US, which are expected to be on the order of 1% overall, should be offset by buoyant spending in Asia and some parts of Europe. This should mean that the scientific market will once again grow at close to global GDP rates – rather than the accelerated growth rate prompted by the US stimulus project. 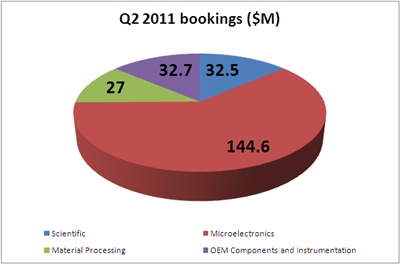 The CEO was keen to point out that it isn’t just the microelectronics sector that is stimulating demand for its lasers – although with smart phones now out-selling PCs, and more than 50 million tablets due to ship this year, this is a huge factor. Ambroseo noted that all other markets are performing well, and described progress in materials processing as “terrific”.

In the materials processing space, Coherent is one of a handful of companies that is looking to commercialize fiber lasers and attack the dominant market position currently held by IPG Photonics. At the moment it is involved in discussions with potential customers and still developing prototypes that are based around a modular design, with initial releases of 1 kW products slated for late-2011.

Coherent’s primary business drivers in materials processing are at the low-power end of the market, for example textile processing and marking, with Simonet noting that the sub-kilowatt laser cutting market is set to grow at more than 10% per year.

“This is an important trend, given the application alignment with our CO2, semiconductor and solid-state lasers,” she said, adding that new, higher-throughput versions of the company’s MetaBeam tool will be launched at the forthcoming Laser: World of Photonics show in Munich, Germany.