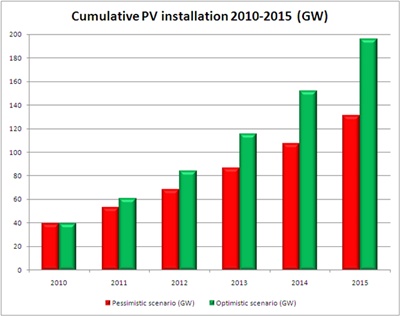 After a decade of unrivalled growth among energy-generating technologies, capped by record installations in 2010, there is now nearly 40 GW of photovoltaic (PV) capacity installed around the world.

That’s according to the latest annual report and forecast for the sector produced by the highly respected European Photovoltaic Industry Association (EPIA), whose figures are widely cited by major players in the industry.

As expected, EPIA reported that the PV market experienced “unprecedented” growth in 2010, led by rapid expansion in the European Union, and in Germany and Italy in particular. Germany installed 7.4 GW [peak] generating power last year – more than the entire world had connected to the grid in 2009. And while the figures from Italy (estimated at 2.3 GW) are known to be a lot less reliable than Germany’s, it is clear that these two countries drove much of the global expansion.

Outside Europe, the US and Japan were the primary market movers, both installing close to 1 GW in 2010, with the US in particular expected to grow quickly through the construction of a number of utility-scale PV projects over the next few years.

The rapid growth of the PV sector over the past couple of years has indeed been remarkable, not to mention highly beneficial to the rest of the photonics industry that supplies optical components and laser manufacturing equipment to cell and panel producers.

Global electricity production
However, a glance at figures for global electricity generation shows just how much further both governments and the industry will need to go for PV to make a major impact. Because solar electricity is by its very nature generated intermittently, the 40 GW of cumulative installations only represents peak production capacity. The more important figure is the total energy delivered, and EPIA now estimates that this 40 GW of peak capacity translates to some 50 TW hours of electrical energy each year.

To put that figure into context, the International Energy Agency estimated global electricity generation in 2007 at close to 19,800 TW hours. The US Energy Information Administration suggests 18,800 TW hours. If the EPIA’s estimate is accurate, the share of electricity generation provided by PV now amounts to approximately 0.25% of the total, compared with the largest shares taken by coal (around 41%), natural gas (21%) and nuclear (14%).

In its report, the EPIA noted the recent events in Japan and the impact that this might have, saying: “The crisis in Japan has re-opened the debate on the world’s future energy mix and security of energy supply. In this context, PV is more than ever part of a global renewable solution.”

“Some scenarios have demonstrated that renewables could meet up to 100% of the EU energy demand by 2050. Switching to PV is not just a realistic option for tomorrow’s energy mix; it is also a desirable solution for society as a whole,” it added.

In its medium-term outlook to 2015, the EPIA report forecasts that cumulative PV installations will grow to somewhere between 131 GW and 196 GW of peak generating power, depending very much on the incentives to adopt the technology offered around the world, and the ability of thre industry to push down the cost of PV through economies of scale and technological developments. Germany is expected to become a smaller part of the overall demand mix as its incentive scheme is scaled back, while the US, Japan and China are all expected to become much more influential market drivers.

At the optimistic end of the EPIA’s growth scenario, this means that the cumulative PV power installed by 2015 could be approaching around 1% of the global electricity supply, assuming steady growth of global electricity demand towards 25,000 TW hours in 2020.

Clearly, there is an awful long way to go before PV can be considered a replacement for any of the major current sources. But the industry is certainly in the midst of a major expansion. “PV markets are stronger than they have other been,” the EPIA said. “PV now appears on the energy map of several countries as a real alternative to conventional electricity sources.”