Giant German optics firm reports a 19% revenue jump in the first half of its fiscal year, with semicon and medical markets leading the way. 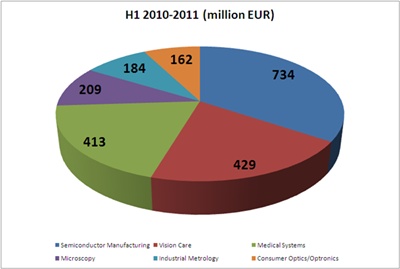 The Stuttgart-headquartered Carl Zeiss Group has seen revenues rise strongly in the first half of its financial year, with sales up 19% on the prior year to €2.14 billion.

That comes off the back of a hugely successful 2009-2010 fiscal year for the company, which its previous CEO Dieter Kurz had labeled its best ever.

Thanks mostly to the strong recovery of the semiconductor market in the second half of 2010, coupled with double-digit growth of its Meditec business unit, fiscal 2010-2011 is looking even better so far.

In the first six months, Zeiss has doubled its earnings before income and taxes from last year to €355 million. At the same time, net income has tripled from €81 million last year to €240 million.

The company has made a major structural change during the past few months by fully integrating the Carl Zeiss Vision business under the group umbrella. But its organic growth has also been impressive. Semiconductor manufacturing is the company’s largest single application area, and sales leapt 39% year-on-year to €734 million in the six months that ended March 31, 2011.

Revenues from life science applications, largely delivered by the Carl Zeiss Meditec unit, have risen 17% to €413 million at the same time, while microscopy also climbed 10% to reach €209 million. Within the Meditec division, sales of ophthalmic systems were up by 16% to €173 million. 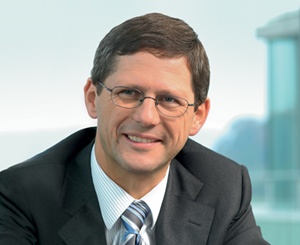 Confirming the strength of demand across its entire range of products, the company also said that its industrial metrology unit grew sales by close to 40%, while consumer optics and optronics, which includes sales of camera lenses and binoculars among other things, rose slightly to €162 million.

According to new CEO Michael Kaschke, who has taken over from Kurz, there is more to come in the second half of the year, as the company also spends some of its profits on a program of expansion and modernization at its global sites and on new production technology.

“We are benefiting from increasing demand in strategically important markets,” Kaschke said, highlighting strong growth in China and India specifically. Business from the Asia-Pacific region has been particularly strong in the life sciences area, with the Meditec division reporting year-on-year growth of 28% here. “We will continue to expand this global presence in a targeted manner,” added the CEO, saying that the next six months would present a stable, positive business environment.