*updated* Private equity firm Norwest sells one of the best-known brands in photonics, eight years after buying what was then known as CVI Laser. 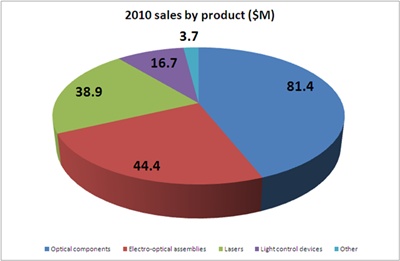 CVI Melles Griot, the laser and photonic component manufacturer, is being sold by its private equity owner.

Norwest Equity Partners, which acquired what was then known as CVI Laser back in 2003, is selling the Albuquerque-headquartered company to IDEX Corporation for $400 million in cash.

IDEX describes itself as an “applied solutions company”, but perhaps more helpfully it sells industrial products including air compressors, pumps and flow meters – among a very wide range of offerings. Listed on the New York Stock Exchange, IDEX is currently valued at a market capitalization of around $3.8 billion, with annual revenues in the region of $1.6 billion, so the addition of CVI Melles Griot will be significant.

After the acquisition is completed, which is expected in 30-45 days, CVI Melles Griot will sit in IDEX’s health and science technologies segment, alongside two other recent acquisitions – ATFilms and Semrock. And it appears that IDEX is not yet done with its photonics acquisitions, as it looks to build a much larger operation.

According to IDEX, annual revenues at CVI Melles Griot currently stand at around $185 million, with operating margins in the high teens and approximately 20% earnings before interest tax, depreciation and amortization costs (EBITDA). Acquisitions in the photonics sector are typically valued at a revenue multiple of between two and three, and 8-9 times EBITDA. A revenue and EBITDA multiple of 2.2 and 10.8 respectively for the CVI Melles Griot deal suggests that Norwest is getting a fair, if unspectacular return on a business that it has expanded significantly through growth and acquisitions since 2003. 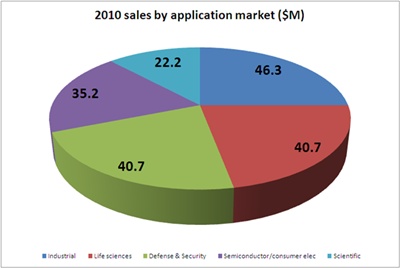 Balanced business
IDEX’s CEO Larry Kingsley said of the acquisition: “We are thrilled with the opportunity to add CVI to IDEX as the cornerstone to our rapidly expanding optics and photonics platform.”

He added: “We believe the CVI Melles Griot croup, Semrock and ATFilms have precisely the type of enabling technology which binds them to their customer and aligns well with IDEX’s growth plans and operating model.”

Stuart Schoenmann, the long-time CEO at CVI, commented: “IDEX has demonstrated a strong commitment to its life sciences business segment and a sustained focus on growing the optics and photonics platform.”

Kingsley highlighted the balanced nature of the CVI Melles Griot business, both in terms of its applications base and geographical sales (see figures).

Discussing the CVI deal with investors, IDEX gave strong indications that further acquisitions in the photonics space were on the way. “The long-term objective here is to build out a very profitable optics and photonics enterprise, and to do that principally by way of organic growth,” said Kingsley, but the CEO added that he would continue to acquire, with the target of having a photonics business generating in excess of $500 million in revenue “pretty quickly”. 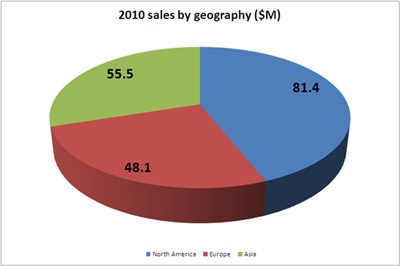 The combination of CVI Melles Griot with ATFilms and Semrock would deliver revenues of around $220 million, suggesting that the company may make another major acquisition of a similar scale to CVI to reach that revenue target.

In terms of changes to the CVI Melles Griot operation under IDEX’s management, any major impact seems unlikely at this stage. According to one source familiar with the company, IDEX is known as slick operator. Kingsley was previously an executive at the large, diversified technology and tool company Danaher, which is known for its ability to drive improved operating margins.

This article was updated May 13.