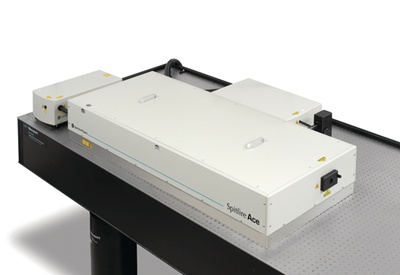 Record-breaking sales and orders for the traditionally weak first quarter of the year at Newport suggest that the strong recovery seen in 2010 is set to continue for some time yet.

The California-headquartered company, home to some of the photonics industry’s best-known brands in Spectra-Physics lasers, New Focus and Richardson Gratings, posted sales of $128.4 million in the quarter – up nearly 20% year-on-year and easily beating previous guidance of $123 million.

Orders remain strong, up slightly on the same period one year ago, which marked the start of the recovery and a spike in orders as customers looked to replenish stocks. At $129.7 million, Newport’s first-quarter orders translate to a book-to-bill ratio of 1.01.

CEO Robert Phillippy also pointed to Newport’s achievement of a long-standing financial goal – reaching a gross margin figure of 45% - as the company delivered a net profit of $20.8 million, up from $5.1 million a year ago.

“Our backlog and orders momentum are very strong,” Phillippy added, before projecting second-quarter sales of between $128 million and $132 million.

Booming demand for semiconductor manufacturing equipment has been crucial to the company’s performance over the past year, with sales into microelectronics applications representing $41.6 million, or one-third of the total, in the latest quarter.

As ever with the semiconductor industry, there is much speculation about when that boom might end, and the next downturn begin. But Phillippy’s visibility remains strong, with prospects for the second quarter remaining solid after a recent $15 million order from a laser original equipment manufacturer operating in the space. Other photonics companies supplying into the semiconductor sector have indicated to optics.org that business should remain strong in 2011, ahead of an expected pull-back in early 2012.

Capital spending growth
The Newport CEO also reported encouraging signs in terms of capital spending at some of the key companies at the top of the semiconductor supply chain, where two of the world’s largest foundries – Taiwan Semiconductor Manufacturing Company (TSMC) and the former AMD operation Global Foundries – have recently announced increased capital expenditure forecasts.

Exactly how that capex will be spent remains unknown to the outside world, but as Phillippy points out, Newport is very well aligned with top-ranking equipment suppliers on a number of product lines, whether spending decisions are technology-driven or capacity-driven purchases. “The odds are very high that we will benefit,” the CEO told investors. “That news is very good.”

Analyst Mark Douglass at Longbow Research, who has a “buy” rating on Newport’s stock, is expecting to see a bounce from that trend, saying: “We see continued upside to earnings as Newport has turned the corner towards more reliable profitability and should benefit from increased semiconductor capital equipment, life science and industrial demand.”

Douglass also pointed to Newport’s long-term aim of delivering 20% compound annual growth over the next few years, through both organic growth and acquisitions. That would imply fiscal 2013 revenues of close to $750 million. “Newport seems well on its way to meeting this goal,” noted the analyst, adding that the better profitability now being shown ought to see the company valued more in line with its peer group.

Another fast-growing area for Newport is sales of laser equipment used in LED manufacturing, a sector in which capacity investments have been dramatic over the past 18 months. The company has three new laser products for LED marking and scribing applications, launched at this year’s SPIE Photonics West trade show, and says it is “quickly gaining traction” as manufacturers ramp their additional capacity. 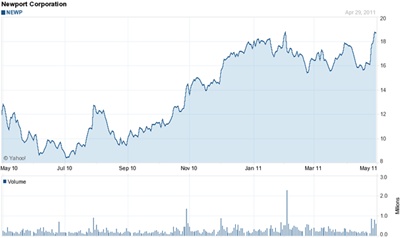 Newport stock performance since May 2010

Meanwhile, the expected slide in returns from the scientific market after the expiration of US stimulus spending has not materialized – partly a result of strong growth in scientific orders from Asia. Phillippy described the record performance from the scientific end market in Q1 as “an excellent result”. Demand from China in particular has had a growing influence on Newport’s financial performance, with the country now accounting for about $35 million in annual sales.

The CEO noted that company operations in Japan appeared to be generally unaffected by the recent earthquake and tsunami, with orders in the country tracking below expectations but not to a significant extent. Happily, Phillippy also reported that the company’s 51 employees in Japan, and those in related sales channel operations, were all believed to be unharmed by the events.

Newport’s stock tracked up after the latest results were announced, closing at $18.73 on April 29. Longbow Research has increased its price target for the company from $22 to $25.