Optical crystal and coating supplier is buoyed by stronger orders and a positive end to 2010, but defense spending remains weak.

Photonic Products Group (PPG), the manufacturer of crystal-based optical components headquartered in Northvale, NJ, ended 2010 on a positive note, with sales of $3.6 million in the final quarter of the year.

That represented a 22% increase on the same period in 2009. However, with a weak spending environment in the defense sector – which accounts for nearly two-thirds of PPG’s sales – during 2010, the company said that it needed to maintain a tight control on discretionary spending last year, focusing on cash conservation.

CEO Joe Rutherford is hopeful that better times are on the way, pointing to relatively strong bookings in the closing half of 2010. As of December 31, PPG had a backlog of $5.4 million.

“The optimism I have previously expressed has been borne out by our 2010 results,” claimed Rutherford. “I feel confident that our focus on internal process improvement, adding engineering resources, new product development, and increased customer focus domestically and internationally, as well as selective and strategic investment in capital equipment will position us for success as our markets continue to rebound and demand for our products grows.” 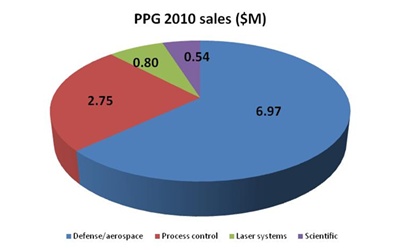 Spending fluctuations
Despite that optimism, PPG remains exposed to fluctuations in defense spending, admitting in its most recent 10-K filing with the Securities & Exchange Commission (SEC): “Defense spending on electro-optical systems over the last two fiscal periods has slowed, impacting the demand for [PPG’s] services in manufacturing custom products for its OEM customers.”

The company’s 2010 results show that defense and aerospace applications accounted for 63% of sales revenues, with three major defense contractor customers representing about half of that total. But the weakened spending environment saw sales to this sector decline 6.5% from the 2009 figure. Debate over US government spending for the next fiscal period remains deadlocked at the moment, with Republicans and Democrats attempting to thrash out a compromise that is certain to include significant spending cuts.

PPG supplies a variety of high-specification optical components through its INRAD, Laser Optics and Precision Metal Optics brands, and gains a key advantage from its in-house crystal growth capability. The company, which has 83 full-time employees across its two sites in New Jersey and Sarasota, Florida, produces components such as ultraviolet filters, which are used in missile warning sensors, among other applications.

Other markets served by the company include laser processing systems and medical lasers, and improved sales in these sectors during 2010 helped to keep total revenues flat from 2009 overall.

PPG remains in a strong cash position, with $4.4 million listed in cash and equivalents at year-end. The company also extended the maturity deadline for two promissory notes totaling $2.5 million. The notes belong to Clarex Ltd., a PPG shareholder, and the prior maturity date of April 1, 2011, has now been extended by exactly two years.