Investors react badly to the thin-film solar company's change of CEO, staff cutbacks and a new focus on niche markets. 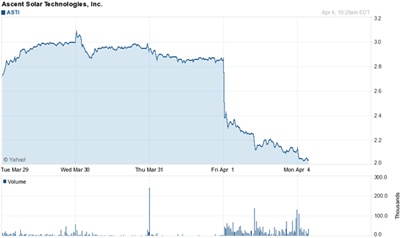 Ascent Solar, a photovoltaics company in Denver that specializes in flexible solar modules based on thin-film CIGS materials, is scaling back its operations and cutting jobs in a bid to stem its cash burn rate.

The firm will focus on specific high-value markets such as defense and transportation, and move away from building-integrated PV applications, blaming the reduction of government subsidies for solar power in Europe for squeezing margins.

Shares in the company slumped in value by more than 20% after the company announced the changes, and Ascent’s market capitalization had fallen to around $66 million in early trading on April 4.

Following the change of strategy, Farhad Moghadam has stepped down as the firm’s CEO. Ascent board member Ron Eller – previously a senior manager at Hewlett-Packard and more recently working in private equity – moves into the CEO’s office, and will also serve as company president.

Just a month ago, Ascent announced that its application for a US Department of Energy (DOE) loan to back a proposed 150 MW module fabrication facility had moved to the due diligence phase. At present, the company has a much smaller manufacturing capacity, but it has still been burning through cash quickly.

In November last year, the company raised just over $20 million in a sale of stock, saying that it would use the funds to complete its second fab, which was expected to have a capacity of 30 MW. But in its latest annual report, for fiscal 2010, Ascent said that its operating loss widened to $31.1 million, up from $21.7 million in 2009 on much higher research and development spending.

Specialty market focus
Amit Kumar, Ascent’s chairman, said of the change in strategic direction: “In the near term, we will focus our activities on emerging, high-value, specialty market applications. Although our cash position is strong, we are taking steps to reduce staffing and operating costs that will minimize the company’s current cash burn rate.” 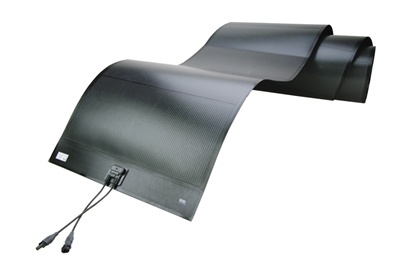 As of December 31, 2010, Ascent listed $27.3 million in cash and equivalents on its balance sheet. The company also has a loan valued at just over $7 million, the bulk of which will become due in 2015.

Ascent’s solar photovoltaic products are unusual, in that they flexible, measure up to five meters in length, and resemble large, black mats. Although its high-performance technology has been rated by the US National Renewable Energy Laboratory (NREL) to have a conversion efficiency of 14% - very high for a CIGS module – the five-meter product shows a more modest conversion of 9.1% under standard conditions.

The company has agreed some supply contracts, and demonstrated that the flexible modules can be integrated in novel applications, such as train rooftops. But it is yet to generate any significant revenue streams. During 2010, it recorded less than $2.5 million in revenues, all relating to research and development activity.

Since its inception in 2005 through December 2010, Ascent has posted a cumulative operating loss of $79.6 million on total revenues of $6.4 million. As of December, the company had 117 full-time employees and around 50 contractors.