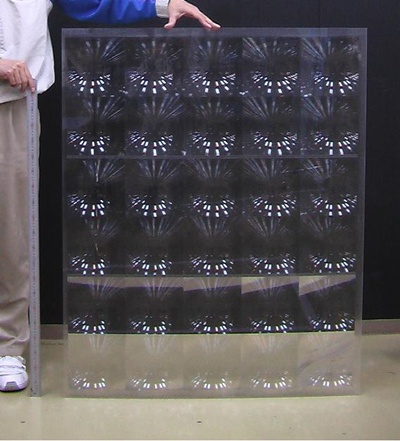 Amonix, the early leader in the market for concentrating photovoltaics (CPV), is using plastic lenses supplied by the Japanese company Kuraray as it scales up module production at a new facility in Nevada.

The US company began producing CPV systems at the facility, which was constructed partly using tax credits provided under the American Recovery and Reinvestment Act, last month. Once fully ramped-up, it will turn out CPV systems with an annual capacity of 150 MW.

One of the key requirements to make CPV cost-competitive is to use a reliable, and preferably cheap, optical component to focus sunlight by a magnitude of at least 500 times onto the small, highly efficient cells that convert the concentrated light into electricity.

Not all CPV systems companies do this in the same way. Some, like SolFocus, use reflective optics, while Amonix and Soitec’s Concentrix division both use a refractive plastic optic, in the form of a Fresnel lens. Others believe that a higher-quality glass concentrator is the key to providing the kind of optical efficiency needed to achieve levelized cost of electricity (LCOE) targets.

Kuraray is best known as a chemicals company, and its first commercial product was synthetic rayon. More recently, and as part of a wider corporate effort to move into new markets including green energy, optics and electronics, it promoted the development of the concentrating lens.

High reliability lens
To do that, the company has exploited its existing methacrylic resin production expertise – improving the material to produce the kind of reliability necessary for a long-term solar deployment in harsh conditions of very strong sunlight and heat.

CPV remains at a very early stage of development, but recent agreements suggest that the nascent market is about to move into a key stage of scale-up, as the first utility-scale deployments are agreed. Amonix is acknowledged as the first major mover at the module and system level, and has previously been tipped by analyst Lux Research as a strong candidate for an initial public offering (IPO) of stock as venture investors look to make a strong exit.

Headquartered in Seal Beach, California, Amonix claims a CPV system efficiency of 27%, although recent advances in cell efficiencies suggest a strong upside to that figure of merit. While not suited to all locations, the approach is seen as a route to low-cost solar electricity production in hot, dry areas with high insolation and, because the CPV approach requires less land than conventional PV farms, high land costs.

The first utility-scale deployment of the technology, a 150 MW plant near Freeway 8 outside San Diego, is scheduled for completion in 2015 – pending the award of a loan guarantee from the US Department of Energy. Current projects are typically much smaller than that, such as this 2 MW installation by Amonix in the southwest US in February (see time-lapse video below):