Despite posting record sales in its latest quarter, Finisar's stock comes under serious pressure after a sudden slow-down in China. 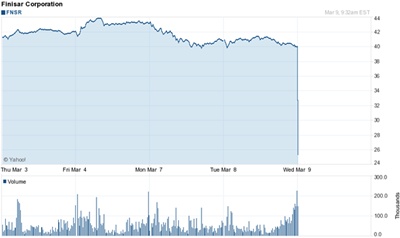 Shares in the optical networking component and subsystem vendor Finisar lost close to one-third of their value in after-hours trading following the company’s warning of a slow-down in business from China.

Although the company posted a best-ever sales figure of $265 million for the quarter that ended January 30, Finisar chairman Jerry Rawls and his senior management team described a “sudden, dramatic” reduction in orders that worsened in early February.

Combined with the seasonal slowdown associated with Chinese New Year celebrations, also in February, the impact is being felt across many product lines, including wavelength-selective switches (WSSs) and reconfigurable optical add/drop multiplexers (ROADMs).

That is a real surprise, because WSSs and ROADMs have been key revenue drivers in recent quarters, with demand more than doubling year-on-year. Finisar CEO Eitan Gertel noted that revenues for ROADM/WSS line card products grew 22.7% sequentially, to $47.7 million in the quarter that ended in January. But that figure is now expected to slump to approximately $35 million in the current quarter.

The drop is partly explained by a reduction in component pricing, traditionally negotiated by network equipment companies close to the end of each calendar year. However on this occasion it is not just that seasonal dip that is to blame.

Double ordering to blame?
In its outlook, Finisar identified “the adjustment of inventory levels at some telecom customers, particularly for products which had previously been on allocation and long lead times, including WSS and ROADM line cards, and a slowdown in business in China overall [author's emphasis]” as one of the main reasons for an expected slump in revenues to between $235 million and $250 million in the current quarter. If that prediction is correct, then it will put an end to a run of eight consecutive quarters of revenue growth at the California-based company.

Rawls was unable to shed much light on the precise reasons behind the sudden drop in Chinese activity, which he believes to be impacting all vendors, and not just Finisar. Previously it has been speculated that customers in China had double-ordered key components like WSSs to guarantee their supply, and it does now appear that some of those customers are hoarding large inventories.

Finisar reported a net income of $18.8 million in the January quarter, representing a sharp sequential drop, despite a 9.2% increase in sales. That was partly explained by the impact of the new telecom pricing, which kicked in on January 1, but the company also lost a patent case with Emcore, costing it $3.5 million.

Operational problems included a surprise under-utilization of its VCSEL fab in Allen, Texas, which was hit by a shortage of production wafers on which to manufacture the devices.

On a more positive note, the company did raise close to $118 million through a public offering of shares in late December, boosting the cash on its balance sheet to more than $310 million. That followed a similar move in March 2010 that raised just over $130 million, providing a significant cash buffer for the company, should the Chinese slowdown develop into something more significant.