After a tumultuous year, Federico Pignatelli is banking on Biolase’s new imaging division to increase revenues in 2011. 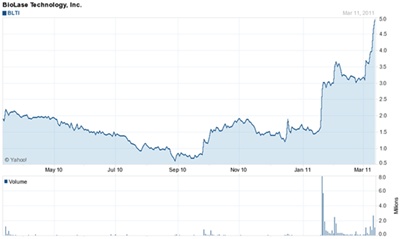 Federico Pignatelli, the CEO of California-based dental laser company Biolase, is keeping his annual salary of just $1, as he seeks to rebuild the fortunes of the company after a turbulent year.

The company has just posted revenues of $26.2 million for its full fiscal year, ended December 31. And although that represented a dramatic slide from the figure of $43.3 million registered in 2009, Pignatelli believes that the major strategic changes that he has instigated over the past six months will ultimately benefit the company’s shareholders - of which he is the largest.

“I will continue to work for an annual salary of one dollar, and the only way that I will make money is if the shareholders make money,” said the CEO. “And I intend to make millions.” *

After the boardroom battle of 2010, which saw no fewer than five directors depart the company, Pignatelli first made a major change to the Biolase sales strategy, which had been reliant on an exclusive deal in North America with distributor Henry Schein.

According to the CEO, that change to a more direct sales force has now started to take effect. In the closing quarter of 2010, revenues rose 56% sequentially to $9.7 million. The company has also increased its revenue guidance for the current fiscal year to between $60 million and $65 million – which will require for a huge jump in sales from the current level.

Pignatelli is basing that sharp growth curve on two key developments: the company’s new flagship “iLase” product, and the recent establishment of a new imaging division. Unfortunately, initial iLase shipments have been held up by the limited availability of a specific component part, claimed the company in its latest financial report.

OEM deal
In the imaging field, which Pignatelli admits will be a much more competitive area than laser treatment, Biolase says that it has an agreement with a European original equipment manufacturer, although it will not reveal exactly who this is. Pignatelli said that product shipments for imaging should begin in June 2011.

The company is also planning to extend its sphere of influence beyond the dentist’s chair, and will increasingly target applications in ophthalmology, dermatology and orthopaedics.

This will be based partly on the patented Er, Cr: YSGG tissue-cutting laser technology owned by Biolase. The company is working on applications including treatment of presbyopia – the very common occurrence of long-sightedness in middle-aged people.

After delivering a net loss of $12 million in fiscal 2010, Biolase ended the year with a precarious cash balance of only $1.7 million and an outstanding loan. However, since then the company has raised just under $6 million in cash through the sale of common stock and paid off the $3 million loan to become debt-free.

Although Pignatelli would not be drawn on the company’s current cash balance when responding to questions from investors, the company did manage to turn a small net profit of $0.1 million in the closing quarter of 2010.

The CEO will be looking to improve on that during 2011, although it appears that this will depend largely on the performance of its as-yet-unproved new imaging division and the hand-held iLase product.

* Biolase’s SEC filings show that although Pignatelli does receive a salary of just $1, he was recently awarded 35,000 stock options in lieu of payment, as well as $50,000 in out-of-pocket legal expenses. The CEO is also the largest individual shareholder in the company by far, with just over 1.5 million, approximately 6% of the total stock.