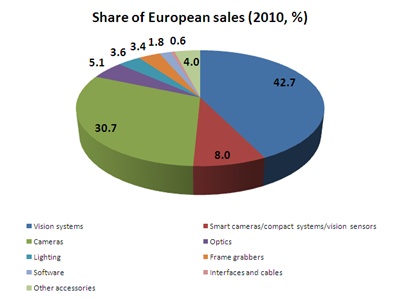 North American sales of systems and components for machine vision applications contracted slightly in the third quarter of 2011, representing the first year-on-year slowdown in the market for 18 months.

AIA president Jeff Burnstein said of the latest figures: “After six consecutive quarters of growth, the third quarter results indicate that we may be in for slower growth in the near term.” AIA’s latest survey showed that while 54% of reporting companies expect sales to be flat for the next six months, a significant 34% anticipate a decrease, and only 14% an increase.

For the first nine months of 2011, machine vision sales in North America are up 15% on the same period in 2010, although AIA’s figures suggest that for the full year that growth will be only 4%.

And, speaking at the recent VISION show in Stuttgart, the world’s largest for the machine vision sector, AIA vice chairman Greg Hollows said that he was expecting a “tremendous softness” in the first half of 2012.

One likely reason for the slowdown is the current downturn in capital investment in the semiconductor industry, which is the most significant market for machine vision technology in North America.

In 2010, sales of systems for semiconductor production monitoring grew very strongly, reaching nearly $856 million and representing almost exactly half of the $1.72 billion North American machine vision market. The automotive, wood production and food production industries are the next largest, but all are far smaller than that for semiconductor manufacturing.

Market breakout
Although not all of those revenues directly relate to optics and photonic components, a very large chunk do. According to the European Machine Vision Association (EMVA) breakout of European machine vision sales – reckoned to be around €2 billion in 2010 – the total is split almost equally between sales of systems and components.

Also speaking at the VISION show last month, EMVA’s director of market research Andreas Breyer said that cameras represented the largest single chunk of component sales, accounting for close to 31% of the total market in 2010, having grown 61% year-on-year.

The next-largest component segment within machine vision is that for optics, at just over 5% of European sales in 2010, with system illumination representing 3.6% of the market and frame grabbers at 3.4%.

In Europe, the machine vision market is much more aligned with automotive manufacturing – particularly in Germany - than the semiconductor industry, and for that reason the EMVA has predicted that sales of machine vision systems and components in Germany alone will grow 20% this year to more than €1.5 billion.