Semiconductor market: chips up, equipment down

Gartner pares back its growth forecast for chip sales next year, while SEMI predicts an 11% dip in equipment revenues. 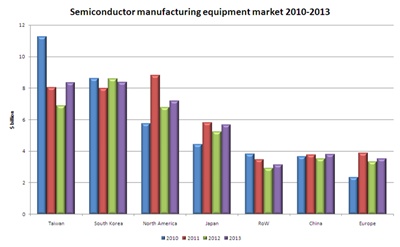 The market research company Gartner has clipped its forecast for the global semiconductor market next year – although its analysts do still expect the sector to grow at a modest rate. They now predict a 2.2% increase in worldwide semiconductor revenue, which would equate to a $309 billion market. Gartner had previously anticipated growth of 4.6%.

The semiconductor market is a key one for many vendors of optics and photonics equipment, from lithography steppers and scanners to a wide variety of test and measurement tools. But while the market for chips may still show minor growth in 2012, the forecast for equipment sales is far more bearish.

The Semiconductor Equipment and Materials International (SEMI) trade group now believes that, following a 4.7% expansion this year, sales of new semiconductor manufacturing equipment will slump by 10.8% in 2012 – with Korea the only major region likely to show any growth at all. The organization released the figures at the SEMICON Japan exposition in Tokyo this week.

Given the cyclical nature of the business, and the very rapid growth of equipment sales registered in 2010, the downturn is by no means surprising, says SEMI’s president and CEO Denny McGuirk. “The industry experiences highly cyclical markets, with the rebound likely to occur in 2013,” he added.

If the prediction is correct, equipment sales will fall from $41.8 billion this year to just over $37 billion in 2012. SEMI’s figures are dominated by sales of wafer processing equipment, which account for around three-quarters of the overall total and are set to decline by 11.6% next year.

Flooding impact slows PC growth
The two other major equipment sectors – covering test and measurement and assembly – are already shrinking in 2011, and will continue to do so, albeit at a slower rate, in 2012. SEMI forecasts a 4.4% decline in test and measurement equipment sales next year to $3.6 billion, and a steeper 10.4% slump in assembly tools to $3.0 billion.

And while the overall semiconductor equipment market is now expected to rebound by 7.4% in 2013, the $40 billion sector will only have recovered to investment levels last seen in 2007. Geographical shifts will mean that Korea becomes the largest single regional market in 2012 and 2013, followed by Taiwan and then North America.

Gartner’s revised forecast for chip sales next year is influenced by both economic factors and the recent serious flooding of Thailand’s industrial zone, which has hit production of many important components in the electronic goods supply chain – affecting the supply of hard disk drives for PCs in particular.

As a result, Gartner has cut its earlier forecast of 10% growth in PC production next year to just 5%, although its analysts have also revised their expectations of mobile phone unit production up slightly, to 7.5%. They now expect 110 million media tablets to be produced in 2012, a figure that would represent a 63% increase from 2011.