Team from Dresden wins award for development of organic semiconductors now being commercialized for PV and lighting applications. 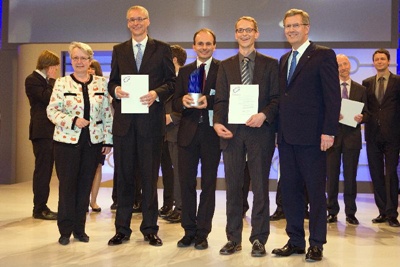 Three pioneers in the field of organic photovoltaics and LEDs have won the 2011 Deutscher Zukunftspreis (German Future Prize) - after this year's short-list was dominated by photonics technologies.

Karl Leo, Martin Pfieffer and Jan Blochwitz-Nimoth – all scientists from Dresden – were presented with the President’s Award for Technology and Innovation by German President Christian Wulff at a ceremony in Berlin on December 14.

Awarded annually, the prize is worth €250,000. Wulff noted the energy-saving potential of the organic technologies at the ceremony, saying: “I’m particularly pleased that this team has won the prize. Their research topic is a great confidence booster, as it can help us achieve a transition in energy.”

The Dresden trio won the accolade ahead of two other finalists from the optics and photonics field, in the form of a team from Daimler working on a new vision system for cars, and three innovators from the emerging field of concentrated photovoltaics that included Soitec Solar’s Hansjörg Lerchenmüller.

Of the winning team, only Leo remains an academic in Dresden, at the Institut für Angewandte Photophysik (Institue for Applied Photophysics, IAPP), where he heads up optoelectronics development. Pfeiffer is now CTO at the organic PV start-up Heliatek, which recently set a new world record for the conversion efficiency of an independently tested OPV cell, at 9.8%. Pfeiffer was among the founders of Heliatek, which was formed as a spin-off of IAPP and the University of Ulm in 2006. 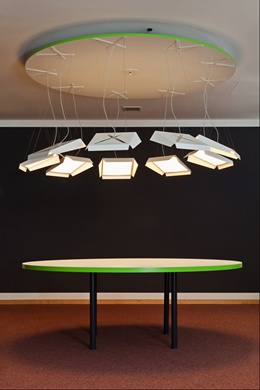 OLED lighting
Blochwitz-Nimoth, who completed his doctorate at IAPP in 2001, is now the chief scientific officer (CSO) at organic LED specialist Novaled. “This highly coveted award is a strong endorsement for all our Novaled colleagues and our partners”, he said. “At the same time, it will encourage people to believe in our vision and to carry on working to ensure that organic electronics appreciably improve our lives in the 21st century.”

Although OLEDs are now used widely in small-area displays – notably those manufactured by the Korean electronics giants Samsung and LG, who have a tight grip on the market – organic electronics technology is still at an early stage as far as commercial lighting and energy-harvesting applications are concerned, and key issues surrounding lifetime, reliability and cost are yet to be resolved.

But the twin potential of OPV and OLED lighting is widely recognized, and promising recent results include the development of a large-area luminaire comprising nine individual 33 cm x 33 cm OLED tiles designed for retail lighting applications.

The luminaire was developed under the €20 million OLED100.eu project funded via the European Commission, which ended in August 2011 and featured Novaled among the consortium members.