Company aims to double sales and reduce manufacturing costs through integration of new pump diodes and a higher-power laser engine. 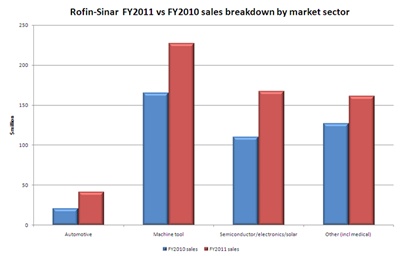 CEO Günther Braun declared that Rofin-Sinar was “back in the game” of high-power fiber lasers, as he reported record quarterly and annual sales from the laser company.

In the year ended September 30, Rofin posted revenues of just under $598 million, up 41% on fiscal 2010, while its net income doubled to $60 million. It means that revenues in fiscal 2011 have even exceeded the pre-crisis year of 2008, as almost all industrial sectors showed sharply increased demand for lasers.

Rofin’s recent sales growth has been powered largely by automotive manufacturers in the US and Europe, and machine tool companies in China. But while Braun expects the automotive sector to remain strong, he sounded a clear warning on the near-term outlook in machine tools.

Citing very recent discussions with Chinese machine tool customers, the CEO said that a number of those customers were anticipating a 20-30% decline in business over the next two quarters. Braun added that the credit tightening in China was affecting any private company without some direct government ownership, and not just small and medium-sized enterprises in the country, as has been indicated by others recently.

Using a traffic light analogy to describe the current market outlook across Rofin’s main application sectors, Braun described nearly all sectors as “on yellow”, with only automotive and medical said to be enjoying a green light for growth. A slump in capacity investments by a solar industry fighting a vast oversupply is also restricting opportunities in this sector to laser processes used to improve cell efficiency performance.

Fiber laser milestones
Although some investors may be disappointed with a decline in profit margins in recent months, the CEO explained that it was crucial for the company to spend money on the development of new technologies, describing fiber lasers as “a key technology for our future business”.

“Our net income was excellent, given our continuing investments in fiber lasers,” he noted. Rofin is increasing its capital expenditure significantly in fiscal 2012, with much of the forecast $27 million-$29 million investment aimed at expanding fiber laser operations.

Braun told investors that having posted total fiber laser source and system sales of just under $42 million in fiscal 2011, Rofin was aiming to double that figure over the next 12 months, in line with its strategy to take a 30-40% market share in the technology within five years. Rival laser producer IPG Photonics currently dominates the fiber laser market, and Braun believes that Rofin’s existing share is in the range of 10%.

The CEO also outlined two milestone developments scheduled for 2012 that will help Rofin to make its fiber laser offerings more competitive by reducing internal costs. In April next year it will incorporate new laser diodes into its designs, reducing pump power costs by an estimated 33%. That should have a significant impact on overall costs, as the diode pump is the most expensive single element within a fiber laser.

By the end of next year, Rofin is also aiming to have developed a fiber laser engine offering 50% more output power than its current offerings – meaning that fewer modules could be used in one of its high-power systems.

IPG Photonics has been particularly successful in penetrating the automotive sector with its high-power offerings, but Braun says that Rofin is now seeing quoting activity from auto makers for its own fiber lasers, specifically referring to 4 kW systems. The CEO added that Rofin’s long-standing expertise in welding applications, coupled with its service offerings, would help to differentiate it from other fiber laser companies in this area. 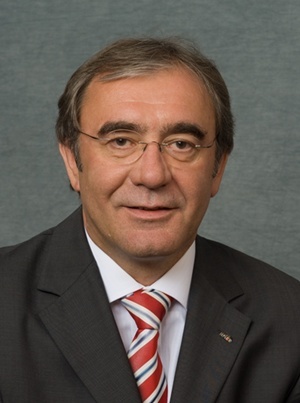 Thailand impact and outlook
While some photonics companies have been impacted badly by the recent events in Thailand, primarily because of the serious flooding at one of the facilities run by contract manufacturer Fabrinet, Rofin may actually benefit from the situation.

Braun reported no problems with Rofin’s own supply chain, but he noted that around 100 of the company’s lasers were thought to be under water as a result of the floods hitting several manufacturers in the area. Although it is too early to tell how its customers will react after the floods subside, there is potentially the need to replace any or all of those lasers at some point.

The current uncertainty in the machine tool industry, which accounted for fully 38% of Rofin’s fiscal 2011 sales, was cited as the reason that Rofin was unable to give sales guidance for the full year. But the company has forecast a sharp decline in revenues for its opening quarter, which ends in December. Braun said that quarterly sales would be in the range of $137 million to $142 million as China continued to tighten its monetary policy, down at least 16% sequentially on the Q4 2011 sales figure of $169.5 million.

Orders remain robust for now, however, and at $153 million Rofin’s backlog is actually 10% higher now than it was a year ago, with record orders of $612 million reported for the fiscal year just completed. “The outlook is challenging, but we can weather the stormy days ahead,” said Braun, adding that much would depend on order intake in the next two quarters, and decisions made in China following the local new year celebrations in late January.