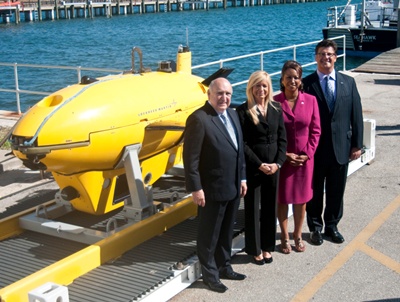 Defense and aerospace giant Lockheed Martin is to develop a laser-based imaging system for underwater inspection of oil and gas industry infrastructure, thanks to a new $2.1 million project agreed with the US Department of Energy (DOE).

The DOE’s Office of Fossil Energy is providing $1.65 million towards the commercialization of an autonomous underwater vehicle (AUV) inspection system based on 3D laser detection and ranging. According to the DOE, by using advanced autonomy and sensing systems the AUV will be able to carry out such inspection tasks up to four times more efficiently than standard remotely operated vehicles, and eliminate the need for support vehicles.

“The proposed AUV-laser detection and ranging system, a marriage of currently existing components, will be taken through an extended offshore test and made ready for commercial use by the end of the project,” stated a brief DOE release on the two-year project, which is part of an overall $26 million funding package that aims to reduce the risks associated with drilling for oil and gas deep underwater – as was highlighted by the catastrophic Deepwater Horizon explosion and spill last year.

Researchers at Lockheed’s Houston, Texas, site will work on the project, while their colleagues at the firm’s Palm Beach, Florida, facility are also now working closely with Space Florida on a related development.

Lockheed and Space Florida have just signed an agreement to advance the testing and production of Lockheed’s “Marlin” AUVs. “Lockheed Martin will outfit the Marlin systems with sophisticated sensors and imaging equipment to conduct commercial underwater inspections,” said Lockheed in a statement announcing the deal.

“The systems are well suited for use in the oil and gas industry as a safe and cost-effective way to inspect underwater infrastructure and pipelines, especially after severe weather such as hurricanes.”

The Marlins will be built at Lockheed Martin’s Palm Beach facility, and will be tested and demonstrated in open waters off Florida’s Atlantic and Gulf coasts.