High-power direct diode laser firm spun out of MIT gets more backing towards commercialization of its technology. 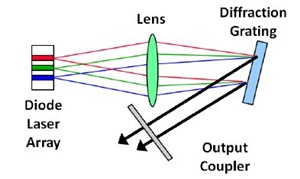 TeraDiode, the Massachusetts Institute of Technology (MIT) Lincoln Laboratory spin-out that is developing very-high-power diode laser technology for defense and industrial applications, has raised $10 million in a series B round of venture capital funding.

The round was led by Argonaut Ventures – the same private equity firm owned by the George Kaiser Family Foundation that invested heavily in bankrupt solar firm Solyndra – while Stata Venture Partners, which invested $4 million through TeraDiode’s series A round in 2009, also took part. Camros Capital and others made smaller contributions to the latest financing, added the Littleton, Massachusetts firm.

According to TeraDiode’s new CEO Parviz Tayebati, the series B investment will “serve a critical role in the commercialization of our disruptive, high-brightness lasers for industrial and defense applications”.

Tayebati replaced previous CEO David Sossen in September, shortly after TeraDiode had won a number of contracts to support the development of its wavelength beam combining technology. That technology uses diffraction to spatially combine the beams emitted by a number of diode sources operating at different wavelengths, to deliver a direct-diode laser with unprecedented brightness.

"In effect we are using the diffraction grating in the opposite way to its usual function," Sossen told optics.org in an interview last April. "Instead of dispersing light over many angles, we are passing the beams into the diffraction grating at a very careful alignment of different wavelengths, and having them emerge in the same place, superimposed in space."

New patent awarded
At the time, Sossen also said that the company was expecting to launch kilowatt-class lasers capable of challenging high-power carbon dioxide, Nd:YAG and fiber sources in the second half of this year.

Commenting on the new venture round, Jason Martin, the managing director of Argonaut Private Equity, said: “TeraDiode has demonstrated that its patented high-power direct diode laser technology can transform the economics of industrial lasers and significantly improve the defense capabilities of our country.”

Martin will now join the TeraDiode board of directors as it looks to further commercialize the technology – the company holds an exclusive licence from MIT, where co-founders Robin Huang and Bien Chann pioneered the wavelength-combining technique.

Chann and Huang are said to hold a number of patents and patents pending to protect the wavelength-combining approach. One patent filed by Chann and colleagues at MIT in late 2009 has just been awarded – US patent 8,049,966, dated November 1, describes how a stack of lasers with different wavelengths can be superimposed using the combination of a cylindrical telescope, transform lens and a diffraction element.