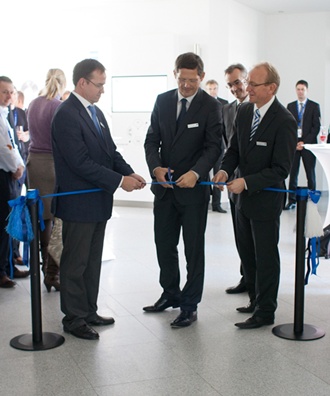 Carl Zeiss has combined two major business divisions to form a single microscopy unit, in a move that the German company says will open up a new chapter in the history of the technology.

Carl Zeiss Microscopy combines the previous MicroImaging and Nano Technology Systems divisions as one, reflecting a trend that is seeing customers in both the research and industry fields increasingly use both optical and electronic microscopy systems.

Ulrich Simon, previously in charge if the MicroImaging unit and now heading up the new combined division, said of the development: “Carl Zeiss and Ernst Abbe together invented scientific microscopy more than 160 years ago. Since then, the company has constantly played a crucial role in shaping the progress of this technology.”

Simon adds that the combination of units, which brings together 2500 employees under a single management, will push the boundaries of technologies such as correlative microscopy, with Zeiss saying it will be the only supplier of a full range of both optical and electronic microscopy systems.

For medicine, examples of the power of correlative microscopy include three-dimensional brain mapping, while for industrial applications Zeiss says that the speed of techniques such as particle analysis have been improved dramatically through the use of integrated systems.

The company adds that the microscopy market is growing fast because previously high-end techniques are increasingly developing into basic technologies that are firmly established in a range of different fields.

Describing the impact that the newly combined microscopy division would have, Simon said that the bundling of research and development and investments has laid an important foundation for Zeiss to provide both the “clout” of a large company and technological expertise across the full gamut of microscopy techniques.

“We expect a further expansion of our [double]-digit growth,” he said. “Our long-term goal is to become the leading customer contact for everything related to microscopy.” Although the combined division has been operating with its new identity and a shared sales organization since October 1, and the legal integration is complete in the US, France, UK and Japan already, the two companies will only be formally integrated in Germany next summer. 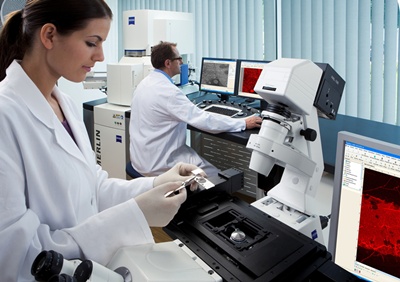 Combined expertise
Last month, Zeiss formally opened its new 1400 m2 microscopy laboratory in Munich, aimed primarily at researchers in the bioscience field. The company told optics.org at the time that the lab, headed up by Jens Rietdorf, would make Zeiss the only microscope vendor able to offer the full range of systems across light and electron microscopy.

“With that, we can support the decision making process of establishing a new methodology in a lab within a scientific environment,” it said. According to Zeiss, the range of systems installed in Munich includes an entire portfolio of 3D optical sectioning instruments, including point-scanning confocals, as well as spinning disc, multiphoton and structured illumination systems.

“The gap in resolution between light and electron microscopy is bridged by the ELYRA super-resolution light microscope systems, offering the combination of PALM and SR-SIM methods on one system with a resolution of up to 20 nm,” Zeiss said.

But perhaps the highlight of the new facility, the company added, is the “shuttle and find” system for correlative microscopy. This tool enables users to locate a region of interest within the sample by using fluorescence under an optical microscope and then transfer the sample to an electron microscope to yield additional structural information.

With brain imaging seen as a major growth opportunity, the new Zeiss division was highlighted at the Neuroscience 2011 show held in Washington, DC, from November 13-16.

At the event, the company showed off its new Axio Zoom.V16 microscope, which combines the wide-field advantages of stereomicroscopes with the high numerical aperture and image quality of compound microscopes.