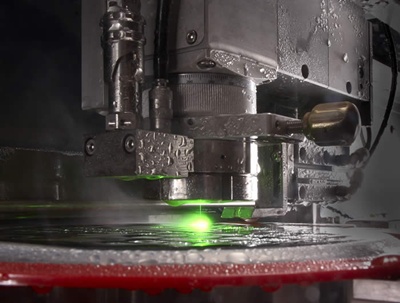 * Article updated October 13
Holland Private Equity (HPE), an investment group backed by a major European pension fund manager and also the European Investment Fund, has become the largest external shareholder in Synova, the Swiss company that specializes in a novel Nd:YAG laser-machining technique using a water-jet as a beam guide.

The investment, said to be worth “up to” CHF20 million ($21.7 million), will be used to further develop products based on the unique laser-cutting approach, as well as an expansion of the company’s sales effort and international development.

“HPE has been monitoring Synova for more than two years and has been impressed with its unique water-jet guided laser technology. With the broadening of its management team 16 months ago, we are impressed with what Synova has achieved commercially over the past 12 months.”

Collaborations
Those achievements include collaborations with companies including the Japanese semiconductor equipment firm Pretech, the Swiss industrial tool provider Posalux, and Sahajanand Technologies (Private), an Indian company specializing in equipment for producing and refining gemstones.

The Pretech deal is focused on commercialization of an automated dicing, scribing and edge-grinding system for wafers used in silicon semiconductor, high-brightness LED and photovoltaics applications. In June 2011, the two companies said that the first tool was in alpha testing with customers in Japan, ahead of a full commercial launch before the end of this year.

Posalux and Synova began working together in 2010, and are in advanced development of a drilling machine for the production of high-performance injection nozzles used in auto engines. The companies say that the water-guided laser provides greater drilling accuracy, meaning that a manufacturing step that has been needed to sort the nozzles according to their flow volume is no longer required.

Sahajanand began working with Synova in January 2011, signing an exclusive agreement to bring to market a “fifth-generation” tool for diamond cutting, minimizing production losses in an industry where any material waste is particularly expensive. That tool, called the “Triveni”, has now been commercialized and is being aimed at diamond producers based in Surat, India, one of the world’s major centers for gemstone cutting and polishing.

Diamond opportunity
Gemstone and jewelry production in India represents a significant market opportunity for lasers. Speaking at the 10th International Laser Marketplace conference held in Munich, Germany, in May 2011, Arvind Patel, the managing director of Sahajanand Laser Technology* described a raft of applications, including laser marking, cutting, welding and micromachining, that were set to grow in the country. The production and export of cut and polished diamonds from the country has grown sharply in the past five years, he said.

Patel also said that India provided a good market opportunity for fiber lasers, partly because the country has to import the methane gas required by CO2 lasers due to the lack of a domestic source. Synova’s MicroJet systems are not affected, since they are based on Nd: YAG sources.

Amsterdam-based HPE’s normal strategy is to invest €10-15 million in European SMEs, taking an equity share of 20-40 per cent as it looks to build sales turnover towards the €100 million mark.

The European Investment Fund committed €25 million to HPE in January 2011, following initial backing through the IMQubator seed funding arm of APG, Europe’s largest pension fund manager. Combined with other institutional investors from Europe and the US, HPE said in July 2011 that it had raised more than its initial €150 million target.