A new body comprising seven US-based solar cell and module makers calling themselves the Coalition for American Solar Manufacturing (CASM) has filed an official complaint with US authorities over what it describes as illegal trading practice by Chinese rivals. 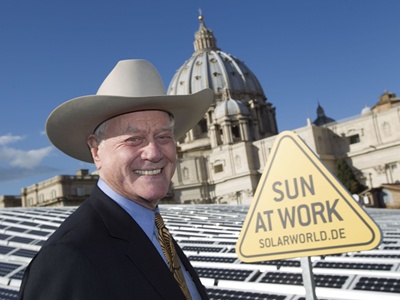 Fronted by SolarWorld Industries America – a subsidiary of Germany’s SolarWorld – the CASM has filed petitions with both the Department of Commerce and the International Trade Commission (ITC) backing its claims that Chinese competitors are illegally dumping crystalline silicon cells into the fast-growing US solar market at artificially low prices, as a result of receiving “massive, unprecedented” subsidies from the Chinese government.

The petitions are said to represent one of the largest China-related “dumping and countervailing” duty cases filed to date, and the largest such case filed in the renewable sector.

The Department of Commerce will have twenty days to decide whether or not to pursue an investigation that will likely take a year to complete. If it supports the CASM allegations, it could begin applying import duties to Chinese photovoltaic products to balance out the cost advantage implied by government assistance.

Intolerable action
Gordon Brinser, president of SolarWorld Industries America, said: “We have joined together as an industry because the level of illegal subsidies and dumping that the Chinese government has mounted is simply intolerable.”

“Chinese producers have used – and continue to use – continuous increases in production capacity and output, fuelled by unprecedented levels of subsidization, to push enormous quantities of dumped and illegally subsidized PV cells and panels into the US market at artificially low prices,” Brinser added.

“American solar manufacturers can compete with any Chinese manufacturers, but not with the entire government of China.”

Although six other companies have joined the CASM, none of them has declared themselves publicly, and will not be named in the petitions filed. CASM merely says that they represent manufacturing sites across the US. The case only applies to crystalline silicon technology – excluding thin-film and concentrator technologies such as those produced by First Solar or Amonix, for example.

Support?
The CASM position does not enjoy explicit support from the US-based Solar Energy Industries Association (SEIA), which has some 1000 members working at all levels in the PV industry – many of whom will stand to benefit from the additional demand stimulated by low prices of solar cells, modules and panels. In addition, many US companies, including suppliers of lasers and other photonics equipment, have benefited from the large purchases of production tools by Chinese manufacturers that have been building out their capacity.

Pre-empting the CASM petition, SEIA published a statement saying that while it supported the right to an investigation into unfair trading practices, such allegations would need to be investigated thoroughly and that the accused parties also had the right to defend themselves.

“There are more than 5,000 companies operating in the US solar energy industry,” pointed out the SEIA president Rhone Resch. “These companies employ over 100,000 American workers, including more than 25,000 in the manufacturing sector. As long as the US is able to compete on an even playing field, the combination of policy certainty, private investment and continued technological advances will keep the solar industry as one of the fastest growing economic sectors in the country.”

“Global trade in solar products has been good for the US by expanding export opportunities for domestic manufacturers, creating jobs and driving down costs to consumers,” Resch added, indicating the benefits of the low-cost modules and panels now available. Chief among the concerns of the SEIA right now is the desire to get the Section 1603 Treasury Program extended for another year, which Resch claims will add 2 GW of solar capacity in the US and support some 37,000 jobs in the country. 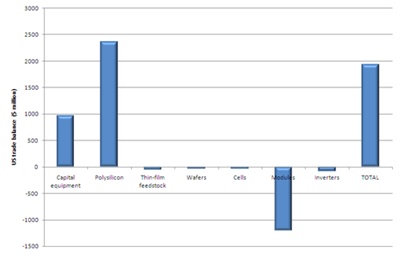 Trade balance
Speaking at the Solar Power International 2011 conference and trade show at the Dallas Convention Center earlier this week, Resch also said: “Over 3100 megawatts of clean solar power in place and more than 4000 megawatts under construction. A positive trade balance with China. Solar works for America.”

On the question of the CASM petitions, he added: “If it appears that trade obligations are not being met, solar companies – whether foreign or domestic – have the right to request an investigation into alleged unfair trade practices. These allegations must be thoroughly examined and, if unlawful trade practices are found, action to remedy those practices should be taken."

"The bottom line is that these investigations provide a legitimate, transparent mechanism for resolving trade disputes and determining what – if any – unfair practices have occurred."

As the CASM points out, the surge in Chinese manufacturing has been one of the primary causes of a 40% decline in world market prices this year – a collapse in demand in key European markets in early 2011 being the other major factor. The CASM also claims that as a result of the Chinese tactics, seven US solar plants have either closed operations or downsized in the last 18 months, eliminating thousands of jobs across the country.

“Violation of international law”
The collapse in prices has also been widely blamed for the demise of thin-film CIGS company Solyndra – although the radical technology that the company had pursued appears to have been at least partly to blame. According to analysts at Lux Research, Solyndra was plagued by low yields and problems with scale-up that added to costs.

But that will not stop the CASM in its tracks, with Brinser further stating: “We cannot allow China to throw its government resources around in violation of international law. Its actions are illegal and must be stopped.”

A key point of argument between the CASM and SEIA are the market figures indicating the trade balance between the US and the rest of world for solar technologies. Earlier this year, the SEIA and analyst company Greentech Media (GTM) published a report showing that the US enjoyed an overall trade surplus – even with China.

However, that report included figures relating to US exports of polysilicon and PV manufacturing equipment. In terms of solar modules specifically, the US was in deficit by over $1 billion in 2010 (see graph above). As a result, the findings have been criticized by SolarWorld and the Oregon Senator Ron Wyden. In a policy brief attacking “China’s grab for green jobs”, Wyden also described the SEIA as “a trade group dominated by Chinese producers”.

SEIA told optics.org that, of its 1000-plus members, only 2% were Chinese, along with just four of the 45 individuals that serve on the organization's board of directors.