Despite the name, Intel’s first generation of Light Peak products will feature electronic rather than photonic connectivity. 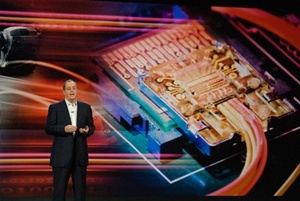 Intel has decided not to use optical technology in the first commercial version of its much-heralded Light Peak connectors for PCs.

The company, which is the world’s leading silicon chip producer, created a splash in 2009 when it revealed plans to release a high-speed, low-cost photonic link by the start of 2011. In fact, at last year’s Consumer Electronics Show (CES) in Las Vegas, Intel’s CEO Paul Otellini said that consumer products featuring Light Peak would be available in time for this year’s event.

CES 2011 ended on January 9, but with no sign of a device featuring the technology. According to media reports from the event, the company said that the first generation of Light Peak products will not use photonics, but instead feature normal copper-based electronic links, which it says will handle 10 Gb/s data transfer speeds.

When optics.org contacted Intel to confirm the accuracy of those reports, the company declined to comment, but did not deny their veracity.

Explaining the change in strategy, David Perlmutter from the Californian company was widely quoted as saying that the results with copper links had turned out much better than had been expected, adding: “Optical is always a new technology which is more expensive”.

Intel had made much of the high connectivity speeds that a photonic link would enable. And in an interview with optics.org last year, Victor Krutul and Mario Paniccia – two of the key men behind the development of Light Peak – explained how they had been able to cut the cost of a photonic link by sourcing components that wouldn’t necessarily meet high-specification Telcordia standards, but which would be perfectly adequate for consumer applications.

Optical component suppliers including Avago Technologies, Oclaro and Enablence Technologies have all been involved in the development of Light Peak, providing low-cost VCSELs and photodiodes as the key active devices for the links.

For now, at least, it seems that the cost of those components is still too high to compete with copper at 10 Gb/s. But where a photonic version would really make a difference is if and when higher speeds are required, as well as applications where a relatively long connection is needed – unlike optical links, copper interconnects get slower as they get longer. In contrast, the high-speed active optical cables developed by silicon photonics expert Luxtera (recently acquired by Molex) for data center and high-performance computing applications are available in lengths of up to 4 km.