Despite a profitable first quarter as a public company, a weak outlook knocks $250M off SemiLEDS' market capitalization. 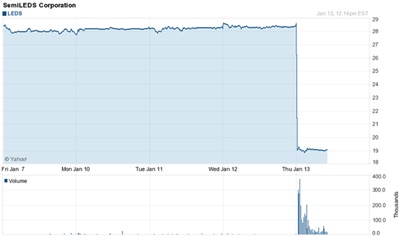 Just a month after its initial public offering (IPO) of stock and debut on the Nasdaq exchange, LED manufacturer SemiLEDs has felt the harsh realities of the market.

After posting a solid and profitable first quarter as a public company, SemiLEDs said that revenues would decline in the current quarter because of pricing pressure, and that the company is now facing additional patent litigation from rival LED chip maker Cree.

After those revelations, the company’s stock price slid by more than 30%, wiping around $250 million from its value.

But CEO Trung Doan then revealed that in the second quarter revenues would decline to between $10.5 million and $12.5 million. Citing pressure on selling prices, Doan went on to explain that “irrational” pricing expectations from a particular customer was the key reason for the decline.

But rather than agree to sell at a lower price, SemiLEDs decided that it would rather not have the margin-eroding business. “We chose not to pursue the contract, as it would negatively impact our margins,” stated the CEO.

Patent battles
On top of that, Doan said that Cree, which launched a lawsuit against SemiLEDs in October last year relating to three US patents (7,737,459, 7,211,833 and 7,611,915), had extended the claim to include a further three patents covering processes used to make gallium nitride (GaN) LED chips.

Nevertheless, SemiLEDs is pressing ahead with both an expansion of its manufacturing facilities in Taiwan, which should double in capacity by August 2011, as well as the completion of its new production site in Fujian, China.

The company is expecting strong demand in its local markets, thanks to government-supported programs such as for LED streetlighting in China, and suggests that the 2011 market for high-performance LED chips will be worth some $600 million in the country.

As well as adding capacity, SemiLEDs is also expecting to launch new high-performance chips capable of a luminous efficacy of up to 135 lm/W within a couple of months, although Doan admitted that the development of higher-efficacy devices may have a negative impact on wafer yields initially, because of additional processing complexity.

On an industry-wide level, LED production capacity will increase significantly over the coming months, as hundreds of production reactors used to manufacture LED epiwafers in volume come on line or the first time. That will likely lead to more price pressures, as the market for high-brightness LEDs moves beyond the $10 billion level reached in 2010.