Subsea camera can see further, more clearly, even in murk

Sharp look: image of a chessboard pattern taken by a standard camera at a distance of 7.5 metres. Right: an image of the same object taken by the new camera prototype.

A new subsea camera can produce clear images at up to 7.5m, typically three times the distance of conventional marine cameras. It can also precisely calculate distances to objects, which the Norwegian developers say, will make work carried out under water, such as in oil rig maintenance or the fishing industry, much easier.

Researchers at SINTEF, Norway, are working with partners across Europe to develop sensors and lasers for the camera. The new tool is designed to make it easier to detect pollution on the seabed, facilitate marine species management, and carry out subsea inspections and maintenance. Marine researchers can more easily and accurately answer questions such as: how many fish and other marine organisms are living in a body of water and on the seabed, and how big are they?

The development is a key achievement of the EU project UTOFIA (Underwater Time Of Flight Image Acquisition), which has a budget of €5.7 million, and will continue until 2018. It is incorporated as part of the European research program Horizon 2020. The other partners in the project are Bright Solutions (Italy), a Fraunhofer research centre (Germany), Odos Imaging (UK), Subsea Tech (France), AZTI (Spain) and DTU Aqua (Denmark).

Tests already carried out by SINTEF demonstrate that the project is "on the right track", the scientists say. In order to demonstrate the camera’s potential, the researchers constructed a test frame which they placed on the seabed in Oslo Fjord, Norway, in an area characterized by turbid water. They then took pictures of the target using the new prototype and compared them with those taken by a standard underwater camera.

The result was that even the prototype of the new system produced much clearer images than the standard system. The new camera can also be installed on the hulls of surface vessels, or on ROVs, in order to monitor keys areas of the seabed, the developers say. 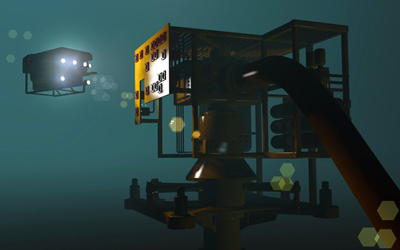 ROV's like this are used for diverse underwater inspections.

“The new camera will provide better general and detailed imaging, and an entirely different database to that which we are used,” said Project Manager Jens Thielemann at SINTEF. For example, how many crayfish are there, and how big are they? The monitoring of marine organisms depends not only on being able to classify species and count individuals, but also an ability to calculate their size.

Currently, marine species management is carried out by means of data gathering using sonar and traditional video cameras. Sonar can detect objects over longer distances, but does not resolve details, while video cameras can observe organisms on the sea floor, but are unable to determine their size or numbers.

“The biggest problem with traditional cameras is that their range is reduced in poor visibility, particularly in coastal waters made turbid by suspended sand and clay particles. Such cameras have a very limited range under these conditions”, added Thielemann. The prototype camera is based on the smart assembly of existing technologies, although the researchers will have to make some key improvements during the next two years. Including time-of-flight technology.

The camera calculates the distance to everything it observes. In this image the depth of field is colour-coded. This approach makes it easier both to measure absolute size and to post-process images automatically. “The new images provide better data and information. High-quality visual imaging also makes it easier to communicate the information to external parties”, said Thielemans. “For example, occurrences of dead organisms on the seabed must be reported to the authorities, and in such cases it helps to have a picture.”

The prototype camera will form the basis of a new type of commercial camera technology that Thielemann is hoping will be robust, compact, and easy to use. The aim is to produce a camera with a volume of between five and ten liters. The components for this technology have been developed at a number of centers across Europe, while SINTEF has assumed responsibility for project management, assembly of the components and image analysis.

Further tests will be carried out in Copenhagen, Denmark, in February 2016, and then in the summer the first version of the camera will be ready – based on the specially-tailored components that will make it lighter, more compact and more powerful than the prototype.

Principle of operation of UTOFIA camera 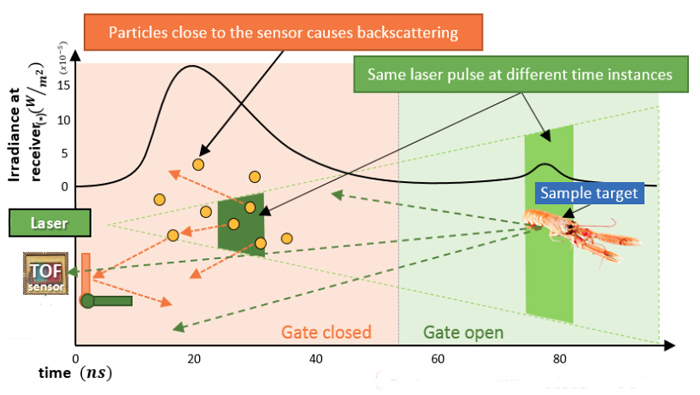