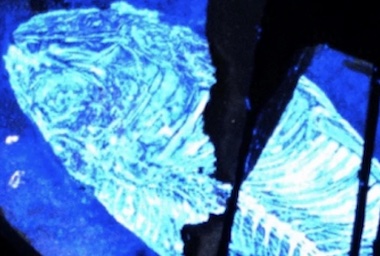 A device developed by the University of Hawaii at Mānoa (UH Mānoa) could be valuable in NASA's future efforts to spot evidence for extraterrestrial life.

The Compact Color Biofinder (CoCoBi) has been designed to locate trace amounts of biological material in a large examined area at video speeds from a standoff distance, using biofluorescence imaging techniques.

Published in Nature Scientific Reports, the new UH Mānoa study built on research into the design of a "standoff biofinder" that has been underway at the university since 2012.

The project's long-term goal has been locating biological materials and biomarkers at distances ranging from 1 meter to 10 meters with scanning speeds below 1 second in an area of 500 square centimeters.

"The Biofinder is the first system of its kind," said Anupam Misra of UH Mānoa School of Ocean and Earth Science and Technology (SOEST). "At present, there is no other equipment that can detect minute amounts of bio-residue on a rock during the daytime. Additional strengths of the Biofinder are that it works from a distance of several meters, takes video and can quickly scan a large area."

The Biofinder exploits the way that most biological materials, including amino acids, fossils, clays and microbes, have strong fluorescence signals which have a very short lifetime of less than 20 nanoseconds. Distinguishing between this organic fluorescence and longer-lived mineral phosphorescence from standoff distances in daylight conditions has been the key to developing an instrument able to identify traces of life on mineral substrates.

Detecting the evidence of past life

According to the project's paper, for organic and biological fluorescence imaging the detector is gated for its shortest exposure time of 1 microsecond and records the short-lived fluorescence signals from organics and biological materials. Short detection time is helpful in blocking off the unwanted mineral phosphorescence as well as background signal from ambient light.

In trials, the Biofinder was used to examine 35 examples of fossilized Knightia fish in the US geologic area called the Green River Formation. The Biofinder instrument imaged the fossils from 50 centimeters away, and showed that all of the fish fossils still contain a significant quantity of bio-fluorescence. The data was validated as accurate using gold-standard traditional techniques including Raman spectroscopy and fluorescence lifetime imaging microscopy.

Fossilized fish around the Colorado River are one thing; the Biofinder team envisages its instrument in use farther afield. If the Biofinder were mounted on a rover on Mars or another planet, it could rapidly scan large areas quickly to detect evidence of past life, even if the organism was small and dead for many millions of years, according to the project.

The device could also be suitable for NASA's Planetary Protection program, for the accurate and non-invasive detection of contaminants such as microbes or extraterrestrial biohazards to or from Earth.

"We anticipate that fluorescence imaging will be critical in future NASA missions to detect organics and the existence of life on other planetary bodies," said Anupam Misra. "The detection of such biomarkers would constitute groundbreaking evidence for life outside of planet Earth."