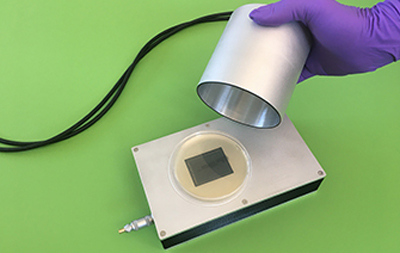 Lensless imager has a wide field of view.

Antimicrobial resistance is rapidly becoming a major public health problem. According to the WHO, if nothing is done, drug-resistant diseases will cause ten million deaths annually by 2050. The mass spectrometry techniques generally used to identify bacteria require expensive equipment—too expensive for developing countries.

A fast, effective, and affordable diagnostic system could be a game changer in certain parts of the world. Years of work at French research agency CEA LETI has led to the development of LensFree, a lensless imaging system. In research for the EU Simble project, the CEA is now adapting its device for use in sub-Saharan Africa.

In this new device, bacterial colonies are illuminated by a semi-coherent light source, scattering the light into a unique optical signature, which is then analyzed to identify the strain. Specifically, the diffraction patterns characteristic of each strain are recorded on a CMOS sensor, and then analyzed by artificial intelligence algorithms.

When a database of lab strains is used, the algorithms are more than 95% accurate, say the developers. This performance “will only improve” as a wider variety of samples is analyzed. The device itself will be “tropicalized”, meaning it will be adapted to withstand exposure to dust and moisture and be able to operate off an unstable power supply, such as in the countries of sub-Saharan Africa.

The cell cultures required for conventional spectrometry take 24 hours; this low-cost device is faster and should help identify bacteria early so that the best treatment can be prescribed. If it turns out to be fast and effective, it will be rolled out initially in Burkina Faso and Benin. Ultimately, however, it could be used beyond the developing world, says CEA LETI.

With its extra wide field of view and its compactness, the lensless imager gives healthcare professionals the possibility of performing analyses at the bedside of a patient rather than in the laboratory. In addition, this technology is at least ten times cheaper than an optical microscope and can analyze up to 10,000 biological objects at a time. The development is protected by 25 patents.

The light emitted by a near-infrared LED is diffracted by the biological object being analyzed and produces a holographic pattern recorded by a CMOS image sensor. Holographic reconstruction algorithms then reconstruct the image of the object on a screen.

Image processing software derived from artificial intelligence can then detect, analyze and even classify the biological objects observed thanks to the monitoring of specific indicators. These operations are automated and not dependent on an operator.

This technique uses generic computer equipment, it can be adapted to several types of medical diagnoses by developing a dedicated chain for processing the acquired data, for example:

Professor M. Drancourt, Head of Department, Laboratory of Microbiology, Hygiene, Epidemiology, Timone Hospital, Marseille, France, approved of the development, saying, “I would like to offer this to my patients. This small microscope would be very useful for pre-diagnosis, for example.”