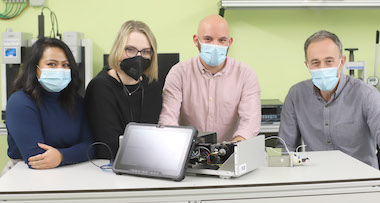 Spain's ICFO research center has developed an optofluidic chip device that could reveal the presence of Covid-19 in saliva in less than 30 minutes.

The new system joins other recent photonics-based advances in Covid-19 detection, including a Raman-based breathalyzer from Nanyang Technological University and a NIST project to detect the virus during a blood test.

ICFO's solution involves a portable flow-virometry reader (FVR) for fast detection of Covid-19 directly from saliva samples, which could combine the short time to results of a lateral flow antigen test with the high sensitivity of PCR, according to the project.

FVR methods are a development of flow cytometry, optimized for the detection of smaller objects such as viruses and viral particles in which cells are counted and sorted using light scattering and/or fluorescence.

The ICFO FVR system integrates a microfluidic chip, a laser-pumped optical head, and a multi-pixel photon counting system, specifically designed for detection of fluorescence from labelled SARS-CoV-2 viral spike proteins. Saliva is taken from a patient’s mouth and introduced to a solution that contains fluorescent antibodies intended to bind to any viral particles present, before then being analyzed.

"The reader collects the sample and sends it into a microfluidic channel that will pass through a laser illumination detection set-up," commented ICFO's Rubaiya Hussain. "The laser illuminates the sample and if there is presence of viral particles, they will emit a unique enhancement of the fluorescence signal."

A fiber-coupled 488 nanometer laser is used as the light source, focused onto the microfluidic channel by a 100x microscope objective, according to the team's published paper. Fluorescence from the sample passes through a dichroic mirror and two optical filters on its way to the detector, a design intended to ensure stray light from the excitation source is excluded as much as possible.

ICFO carried out a blind test with 54 samples and was able to confirm 31 cases out of 34 positives with only 3 false negatives. The device measured 3834 viral copies per milliliter, said by ICFO to be "at least three orders of magnitude lower than that of commercially available rapid antigen tests, meaning that the device is capable of detecting the presence of virus at very low concentration levels."

The device's architecture could also be adapted to suit detection of other viruses, according to ICFO's Ewelina Wajs.

"Our device is very versatile," said Wajs. "By selecting proper antibodies, this technology could also detect seasonal coronavirus or influenza virus, or even microorganisms in water, such as Legionella and E-coli, with a very fast response time, with respect to gold standards relying on culture."