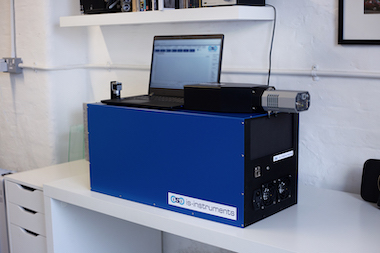 A Raman platform developed by Toptica of Germany and the UK's IS-Instruments is designed to simplify the application of deep UV Raman spectroscopy to online process control.

The platform has been conceived particularly to suit the manufacture of biotherapeutic products including monoclonal antibodies and antibody fragments. These are expensive to manufacture, with new analytical and process control tools to monitor their production increasingly in demand.

Raman using deep UV wavelengths is an attractive technique for this purpose, potentially able to deliver high fluorescence levels from low sample concentrations. But the instruments have tended to be expensive to purchase and complex to operate.

The Odin spectrometer uses a specific solid-state laser and spatial heterodyne spectrometer to simplify the device design as much as possible compared to previous devices, a new architecture said to have been designed for a compact footprint and easy integration.

"Deep UV resonant Raman has long been known to have the potential for being able to measure substances other spectroscopic techniques have not so far been capable of. Equally, the instruments currently available are extremely large, and expensive both to purchase and to maintain," commented Michael Foster of IS-Instruments.

"This has made the technology accessible only to those organizations with physical space to house them and with significant budgets to operate them. Odin represents a departure from that, as it is smaller and doesn't have the internal mechanisms associated with high running costs."

The principle underlying deep UV resonant Raman spectroscopy (UVRRS) exploits the way that the inherently weak Raman signal can be enhanced if the energy of the excitation laser corresponds with an electron transition in the molecule of interest. This resonance phenomenon can, under the right circumstances, boost the Raman signal considerably.

"Below 250 nanometers operation, the target Raman and fluorescence response becomes spectrally separated, allowing samples to be analyzed in detail. As the laser wavelength reduces below 250 nm, it approaches the electronic transition of several organic molecules producing a resonant effect that can amplify the Raman signal by several orders of magnitude," commented the developers in Odin technical literature.

The deep UV sources needed have presented a particular hurdle to adoption of UVRRS in cost-sensitive scenarios. Odin employs a Toptica solid state diode source, the TopWave 229, with performance characteristics designed to make it more suitable for such applications.

"The compact deep UV Raman instrument uses a diode pumped laser and a spatial heterodyne spectrometer (SHS) combined with an all-reflective Raman collection probe," said Toptica. "The diode laser allows the instrument to maintain a compact form, whilst the SHS allows for a large optical throughput resulting in a comparably large laser spot at the target, mitigating against power density-induced sample damage."

In trials, the Odin instrument successfully captured the Raman spectra of a range of biochemical samples, including immunoglobulin (IgG) at varying concentrations, tryptophan, and a series of domain antibody (dAb) samples. The dAb samples were extracted at different stages of a pilot bioreactor manufacturing process and at varying dilutions.