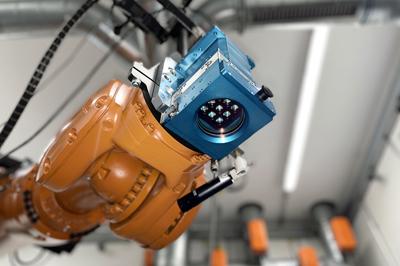 New welding head enables the joining of thermoplastics and metal.

With a new type of welding head with nine individual laser spots, thermoplastics can be joined to thermoplastics and thermoplastics to metal over large areas. The Laser Zentrum Hannover (LZH)-developed equipment and process together with six partners.

Laser welding processes for polymer components have so far been used primarily to create narrow weld seams, such as for microfluidic applications or for welding electronic components and containers. A large laser spot is needed to join thermoplastic over larger connecting surfaces.

For this purpose, neoLASE and Coherent have developed a diode unit with nine individually controllable diode stacks. The special feature: The laser power of the spots can be adjusted independently of each other. With a specially developed optics from Sill Optics, it is thereby possible to adjust the intensity distribution.

In this way, the temperature in the weld can be adjusted according to the local thickness and nature of the material, as well as the weld geometry. LMB Automation GmbH has then combined the components in one welding head. The development was made possible by a measuring device from PRIMES GmbH, with which multifocal optics can be measured for the first time. 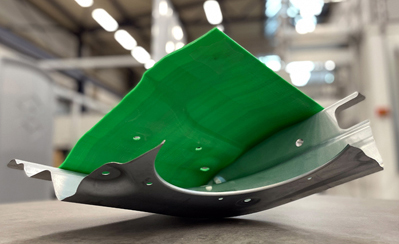 The process joins thermoplastic to metal on a Volkswagen door demonstrator.

Process and software development at LZH

The process for the new welding head was developed by the scientists of the LZH. For optimal connection of thermoplastic to metal, they structure the metal in advance.

Then, they heat the metal of the work piece to such an extent that the plastic melts via heat conduction and joins firmly to the metal. Using the process, they were able to successfully join thermoplastic door elements to a metal frame.

The automation of the process is important for its use in series production in automobile manufacturing. For this purpose, the scientists, together with LMB Automation, have developed concepts for the use of the welding head on a robotic arm and have also written the necessary software programs.

As a result, the specified laser power profile can be precisely maintained when moving the robotic arm. Volkswagen provided support in the practical implementation and made demonstrator parts available.

The project MULTISPOT was funded by the German Federal Ministry of Education and Research as part of KMU-Innovativ.