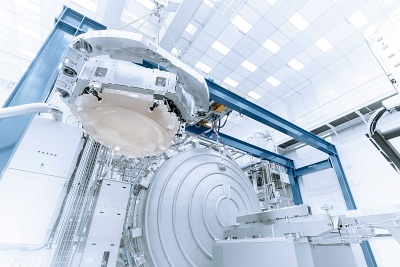 Zeiss has reported record-breaking sales and earnings for its latest financial year, with a similarly bulging order book suggesting further growth in 2023.

The Oberkochen, Germany, headquartered optics company posted sales of €8.8 billion for the 12 months ending September 30, up 16 per cent on last year’s total and surpassing €8 billion for the first time.

Each of the firm’s four main divisions contributed to the growth, spearheaded by the semiconductor manufacturing technology (SMT) business, whose sales jumped 20 per cent, to €2.8 billion.

The relative strength of the US dollar against the euro currency also had a positive impact, although for the SMT division the sharp increase in sales largely reflects increased demand for high-specification optics used in cutting-edge lithography equipment.

Those sales figures translated to earnings before interest and taxes (EBIT) of €1.6 billion, up €100 million on the prior year and another record-breaking total.

Semiconductor equipment strength
Despite the strong performance Zeiss’ CEO Karl Lamprecht, who was appointed shortly before the onset of the Covid-19 pandemic, highlighted the tough macroeconomic environment, saying:

“The past year was certainly very difficult and challenging in many places due to the geopolitical conditions. Nevertheless, we can look back on another successful fiscal year with a high degree of economic satisfaction.

“For the first time in our history our annual revenue has exceeded the threshold of €8 billion. All four Zeiss segments and more than 38,000 employees have contributed to this. We are growing and at the same time investing in the future worldwide. The success shows that we are on the right track with our strategy focused on megatrends.”

Key partner ASML, which owns a major stake in the Zeiss SMT business, is expected to begin shipping high-NA EUV lithography systems in 2025.

“In the future, the next EUV generation, high-NA EUV, will enable the production of more powerful and more energy-efficient chips at lower costs,” Zeiss pointed out.

R&D spending rises again
The company’s three other divisions all posted solid sales growth of around 15 per cent, although each was more positively impacted by currency effects than the SMT business.

Its medical division is currently the second largest by sales total, and saw revenues grow 15 per cent, to €2.3 billion, with the industrial division reporting €2.1 billion, and the consumer markets division €1.6 billion.

“The high investments by the automotive industry in alternative drive technologies in particular contributed to this within the field of industrial quality assurance,” commented Zeiss, adding that demand for optical metrology and software products has also developed positively. Other growth areas include the firm’s cine lens business, which has resumed operations.

Alongside the sharp increase in sales has come a similar rise in research and development spending, always cited by Zeiss as the key to its ongoing prosperity.

At just under €1.2 billion in the latest financial year, investment in research efforts represented 13 per cent of turnover, with targeted investments at its main site in Oberkochen, as well as in Jena, Wetzlar, Dresden, and elsewhere. 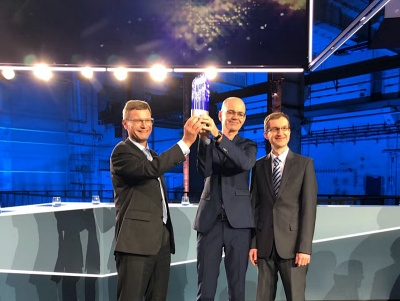 Uncertain environment
One recent result of that investment saw a team from Zeiss win the prestigious Deutscher Zukunftpreis, thanks to their development of a lattice lightsheet microscope based on a Nobel-winning super-resolution technique.

Thomas Kalkbrenner, Jörg Siebenmorgen, and Ralf Wolleschensky from the firm scooped the prize in October, for a technology that allows biomedical researchers to observe living cells live and in 3D for hours or even days. They devised an optical arrangement that dramatically reduces the laser intensity incident on the living cells.

Looking ahead, Lambrecht warned that despite an order book standing at €10.7 billion, the macroeconomic environment remained highly uncertain.

“We are monitoring developments and the associated risks very closely and are preparing ourselves as much as possible to be able to respond to new situations and challenges quickly and effectively,” said the CEO, although he does currently expect sales to rise to another high in the year ending September 2023.