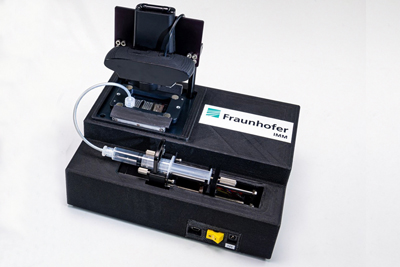 PCR processes are the diagnostic gold standard when it comes to identifying coronavirus infections. Unlike rapid antigen tests, they function even in the case of a low viral load and detect the pathogen with a high level of accuracy. The disadvantage of standard PCR tests is that they are not currently suited to mass, ad hoc, on-the-spot testing, where the greatest possible ease-of-use, rapid results and reasonable costs are required.

Fraunhofer researchers are currently developing a scalable, open and digitalized PCR test system that will produce results in just 15 minutes. The compact demonstrator system will be on display from November 14 to 17 at the joint Fraunhofer booth at the COMPAMED trade show in Düsseldorf, between 14-17 November.

The Fraunhofer Institutes for Microengineering and Microsystems (IMM) and for Experimental Software Engineering are developing a rapid test system as part of the OPEN-POCT project. The aim is to combine the advantages of more sensitive PCR tests and cheaper, but less reliable, on-the-spot antigen tests that are sold in drug stores and supermarkets.

The device, which measures 15 x 15 x 20 cm, has a simple design. In addition to the microfluidic cartridge and pump, it includes heating structures and a fluorescence camera as a detector. No expensive components are needed. The new tests will also be more affordable than the PoC (point of care) PCR rapid test systems that are currently on the market, say the developers. The project is funded by the German state of Rhineland-Palatinate as part of the European Regional Development Fund.

”It is not currently possible to use PoC PCR systems to contain or even prevent a pandemic, because the test kits would have to be available immediately in large quantities and would also have to allow for cheap mass testing, for example in test centers at airports,” commented Dr. Christian Freese, a reesearcher at Fraunhofer IMM.

“The goal of the OPEN-POCT project is to call this apparent dogma into question. Only a sensitive, rapidly available alternative to PCR testing in the lab that is suitable for use anywhere will make it possible to effectively break chains of infection in the event of an outbreak and to contain a pandemic in its early stages before the global movement of people makes this impossible,” he added. 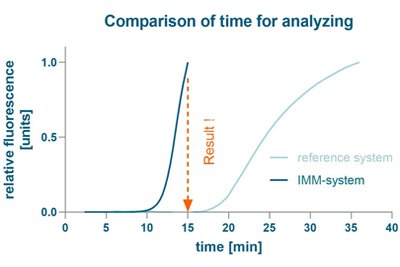 PCR testing out of the lab

The problem is that cost-effective antigen tests that can be produced in large quantities cannot be made available immediately after an outbreak of a new infectious disease which could cause a pandemic. The development time needed for these tests is too long to contain or even prevent a pandemic.

On the other hand, current PoC PCR tests are up to 30 times more expensive than antigen tests. Low production volumes, high investment costs, sophisticated logistics solutions and complex microfluidic structures are among the factors responsible for the high prices. As a result, they are not suitable for mass testing or for use at the point of care.

“We aim to bring PCR testing out of the lab and into a rapid test system that can be used on the spot for large numbers of tests. This is why we are designing our solution as an open system to allow multiple manufacturers to produce the components, e.g., cartridges and reagents,” said Freese. “In principle this is all about developing an administrative and regulatory ecosystem for a scalable, open, digitalized PoC PCR test system to detect infectious agents that could cause pandemics. The price of a test for one person must only amount to a few euros.”

The researchers also hope to reduce the time needed for the PCR process. “A PCR test, for instance at the airport, must only take a few minutes,” says Freese. The PCR methodology requires two temperatures. The reagents with the sample fluid must be heated and cooled, which is very time-consuming.

The heating block in the PCR devices is initially heated to over 90 degC so that the DNA strands can be separated. It is then cooled to around 60 degrees. After this, the virus genome is duplicated. One DNA strand becomes two and in the next stage two become four and so on. This allows the virus to be detected.

To avoid the need for the long-winded process of constant heating and cooling, Freese and his team use two different heat zones – one hot chamber and one cooler chamber. The sample fluid is pumped back and forth between them by means of a pump in the cartridge.

The fluid moves from one heat zone to the other in the detection cartridge through loop-shaped microfluidic channels. As a result, it is stretched out, which gives it a large surface-to-volume ratio and, therefore, allows for rapid heat transport. “This means that the system reaches the necessary temperature for the PCR process quickly and we no longer have to constantly adjust the heat block to the two different temperatures,” said Freese.

The researchers’ preliminary tests with purified virus RNA were much quicker than standard PCR lab tests. The results were available after only 15 minutes, but the level of sensitivity stayed the same. The first preclinical evaluations are underway at the University Medical Center of Johannes Gutenberg University Mainz.

Another advantage identified by Freese is the ability to rapidly adapt the OPEN-POCT platform for use with other viruses: “PCR tests can be quickly adjusted to any agent. The genetic information of SARS-CoV-2 was decoded very rapidly,” he said.